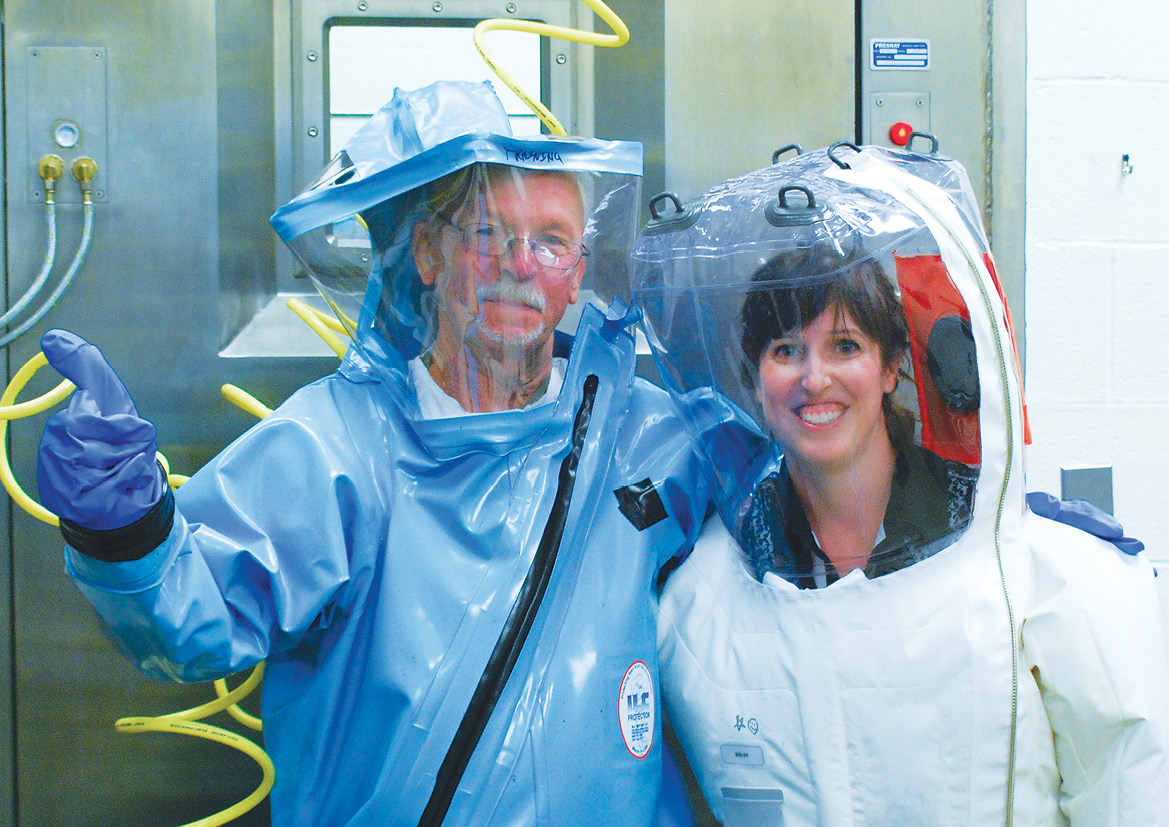 Photo provided by the Bixler family

Sandra Bixler and her father, Rich Bixler, are shown in positive pressure biocontainment suits in the USAMRIID training lab during a family visit.

Brains, beauty, and a fearless desire to be of service, Sandra Bixler has it all. The daughter of Richard and Linda Bixler was raised in Suffield along with her twin brother Steven, and is now a Principal Investigator at the Therapeutic Development Center, Molecular and Translational Sciences Division, at the US Army Medical Research Institute of Infectious Diseases (USAMRIID). What does that mouthful of words mean you may rightly ask? Basically, Sandra, who has a Ph.D. in Emerging Infectious Diseases works trying to find vaccines or antidotes to the most deadly viruses on the planet such as Ebola, Lassa, and other hemorrhagic fever viruses. USAMRIID, located in Fort Detrick, Maryland, is the Army’s main facility for research into countermeasures against biological warfare and the Department of Defense’s only laboratory equipped to study BSL4 (biosafety level) viruses. So dangerous and fast acting are the viruses, for which no effective treatments are available, that researchers must wear biocontainment suits when they are working in the lab. The incubation period for Ebola for instance is between 2 and 21 days and death can occur within a month of contracting it.

Because most of her studies and jobs have been under the auspices of the federal government, following Sandra’s path to her present position requires an ability to decode acronyms. To begin with though, she graduated from Northwest Catholic in 2003. She chose that school because she had always been interested in science and it had new chemical and biology labs. She attended UConn intending to become a medical doctor, but a microbiology course she took there got her hooked on the field and she graduated with a B.S. with honors in Molecular and Cell Biology in 2007.

Upon graduation Sandra worked for a year as a lab technician at Vallid Labs in Agawam performing microbiological analysis of food and water samples to test for such things as E.coli, mold, and staphylococcus. During that year she applied, and was accepted to doctoral programs at both Yale and USUHS (Uniformed Services University of the Health Sciences). She chose USUHS, which is primarily the military’s medical school and ranked among the best in the country, for a couple of reasons: (1) it was tuition free, and (2) she could research infectious diseases which was her area of interest. Sandra adds that with her brother having been in the armed forces she did have a soft spot in her heart for working with the military.

She was a civilian graduate student/postdoctoral fellow in the Emerging Infectious Diseases Program at USUHS from August 2008 through July 2014. I would bullet point what she did during these six years, but frankly, it was highly technical, having to do with T helper 17 cells, transcriptional pathways, mucosal immune responses to vaccines among other things and I confess that I didn’t understand it enough other than to say in exceedingly oversimplified lay terms, that she worked with nonhuman primates (rhesus macaques) to try to understand their immune system responses to certain vaccines.

In April of 2014, Sandra successfully defended her dissertation (again, highly technical) and was awarded her doctorate.

In August 2014, she began a two-year stint as a postdoctoral fellow in the virology division of USAMRIID where she served as a study director and/or co-principal investigator in seven different studies testing vaccines for the deadly filoviruses. She was awarded a Chemical and Biological Defense Research Associateship from the National Research Council.

From November 2016 until the present as a Principal Investigator at the Therapeutic Development Center, she is designing, directing, and executing studies of BSL4 viruses focused on new therapeutics against biothreat agents in rodents and nonhuman primate models. She works with macaques which are bred in China and are the gold standard for Eboli research as they best represent the path the virus takes in humans. Sandra sits on the USUHS Institutional Animal Care and Use Committee which ensures that the lab animals are treated in as humane a manner as possible.

Sandra loves working in the lab even though the hours can be really long and the positive pressure protection suit can be uncomfortable. “It is exciting to know that some of the vaccines I’m working on have actually been used in the field to treat those infected with Ebola, and rewarding to know that one day we may be able to prevent or effectively treat this disease.” Her least favorite part of the job is the paperwork, training, and regulations, but she realizes that because of the hazards involved, the administrative component is unavoidable to keep the researchers safe.

Since 2009 Sandra has authored or contributed to 15 publications in field journals and presented at conferences in Germany and Portugal. Suffield can be rightly proud that one of its daughters is making the world a safer place.

Next Article
Whose Choice Is It, Anyway?
It’s more than a little frustrating for supporters of a community center…