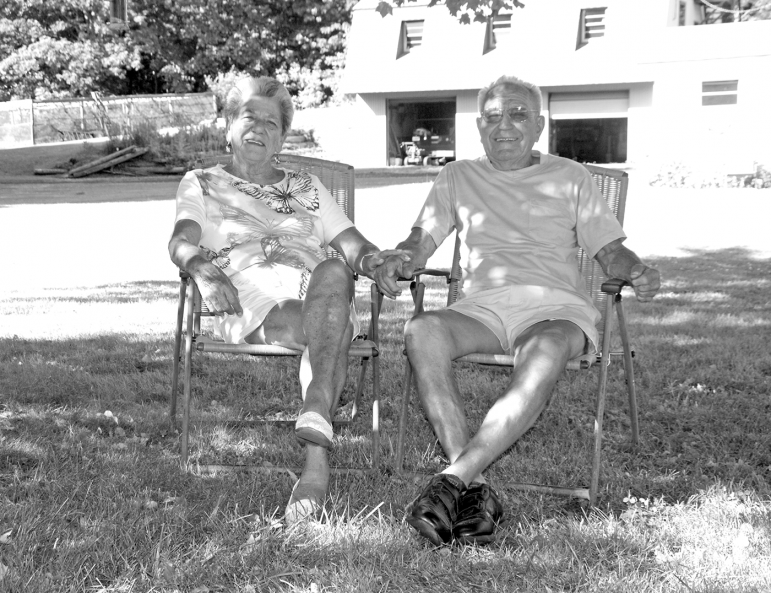 Gloria and Ferman Wilson relax in their neatly kept back yard.

Ferman Wilson started to donate blood 50 years ago when he was a Corporal in the army and stationed in Japan and Korea. His wife Gloria began in 1969 and had to stop for a few years as she had diabetes. That is not a factor now, so she continues to give. Blood can be given every three months and as they spend the winter in Florida, they each give two pints apiece when they are there and the same when they are back in Suffield for the rest of the year. To date Ferman is one pint short of 25 gallons and Gloria has given almost 21 gallons. For seven years Gloria has also been a platelet donor and those can be given more frequently. That involves lying with both arms outstretched and blood being taken from one arm to go through what looks like a still and then with the platelets removed the blood goes back in on the other side. She said that you get very cold during the process when your body is missing that blood.

One Christmas Eve she was called and, even though she was going to have company, she went to donate. Those platelets were then flown to Rhode Island for a child with cancer. You can’t ever give a greater Christmas gift than that.

Gloria is a Suffield native and Ferman met her through some of her relatives when he moved to Windsor Locks from Pennsylvania. They have been married for 61 years and have three sons, six grandchildren and one great grandchild. Ferman, before he retired, was a custom builder and remodeling contractor. Gloria started the mini bus in 1974 and was a bus driver for 22 years.

One  thinks you could certainly say that their lives have been and continue to be well and generously lived.

Next Article
Farewell, my Deere
My lawnmower, my faithful mount for 12 years, has cut its last…