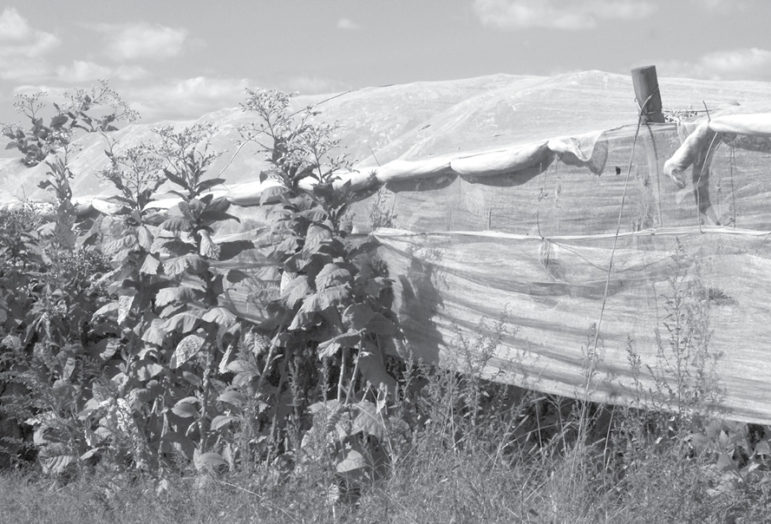 Late in the season, these shade tobacco plants on Warnertown Road escaped from their netting cover and were passed by during picking. Seen high at the left are the blossoms of some plants that escaped by tearing through the cloth.

If you have lived in Suffield since the mid 20th century, you may have noticed the decline in acres of shade tobacco grown. Even in the last 15 years this crop has continued to decrease.

During the late 1950’s Suffield was a patchwork of fields covered by white tent cloth. Every area of town had shade tobacco being raised on the best soils available. Most high school students found employment is some phase of the operations. Men from the Caribbean Islands came here to work and girls from Pennsylvania came to tie and sew the tobacco.

Shade tobacco from the Connecticut River Valley is some of the finest tobacco raised worldwide. The tent cloth provided an environment that produced a leaf with a delicate texture that burned well and smokers craved.

The Shade tobacco business in Suffield has now diminished to one grower. The Markowski Farm on Babbs Road, West Suffield is the lone survivor. There are many reasons for the decline. The cost of raising tobacco under tents is very labor intensive, and can cost as much as $35,000 per acre to produce. Added to that cost is the issue of being able to sell the crop. Buyers are few and very selective. If you are growing a crop without a contract there is a risk factor that most farmers can’t chance. The problem is that the buyers would like to buy just the prime pickings and leave the other half of the tobacco for the farmer to sell. Budget wise this does not make the balance sheet work.

Because the shade acres have been reduced to such a level the broadleaf and Havana crops are now occupying the former fields.

Next Article
Tax Exemptions Explained
The Assessor’s Office is located in the Town Hall, 83 Mountain Road,…