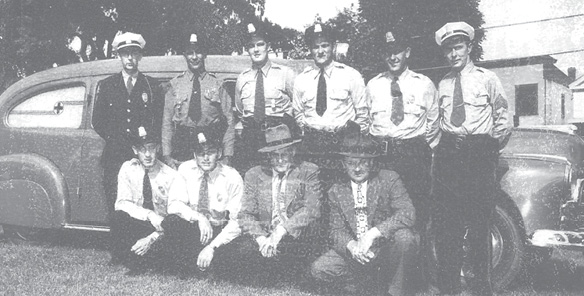 Let’s go back to 1976. The Town of Suffield Annual Report noted remarks that made history that year!

Our newly elected selectmen were shown marching down Main Street during the Bicentennial Parade. At the time our First Selectman was Chester A. Kuras, Second Selectman; Howard W. Orr and Amiel Zak served as the Third Selectman.

The Suffield population as of 1976 was approximately 9,800. During the year one new industrial complex for Pierce Business Archives, Inc. was built on our newly formed industrial park. We began to address solid waste disposal, and a new sanitary landfill was contracted to Mountain Road in West Suffield. 1976 brought us together as a community to celebrate the country’s Bicentennial. Our Town Green graciously accepted the gift of a bandstand that would be used to host a number of celebrations, including a “mammoth firework display,” a ceremonial parade, a huge town picnic on the Green, a trick horse show and a host of other scheduled events.

We also acknowledge the contribution to the Town by the Suffield Police Association in voluntarily providing service for so many years. In 1976, 289 ambulance calls were responded to. With new State requirements, a temporary ambulance committee was formed and created a new association. This new association and trained attendants will provide the service so capably performed by the police in the past.

In 2014-2015 Suffield statistics reported that our population was 15,764. 1,505 calls for service were provided by the Suffield Volunteer Ambulance Association. Today over 80 active volunteers – townspeople, homemakers, students, retirees and business owners, representing all age groups, contribute over 20,000 hours as medical providers on one of three ambulances.

As a community we would like you to join us to celebrate our achievements. Please feel free to call the Suffield Volunteer Ambulance Association at 1-860-668-3881 for details.