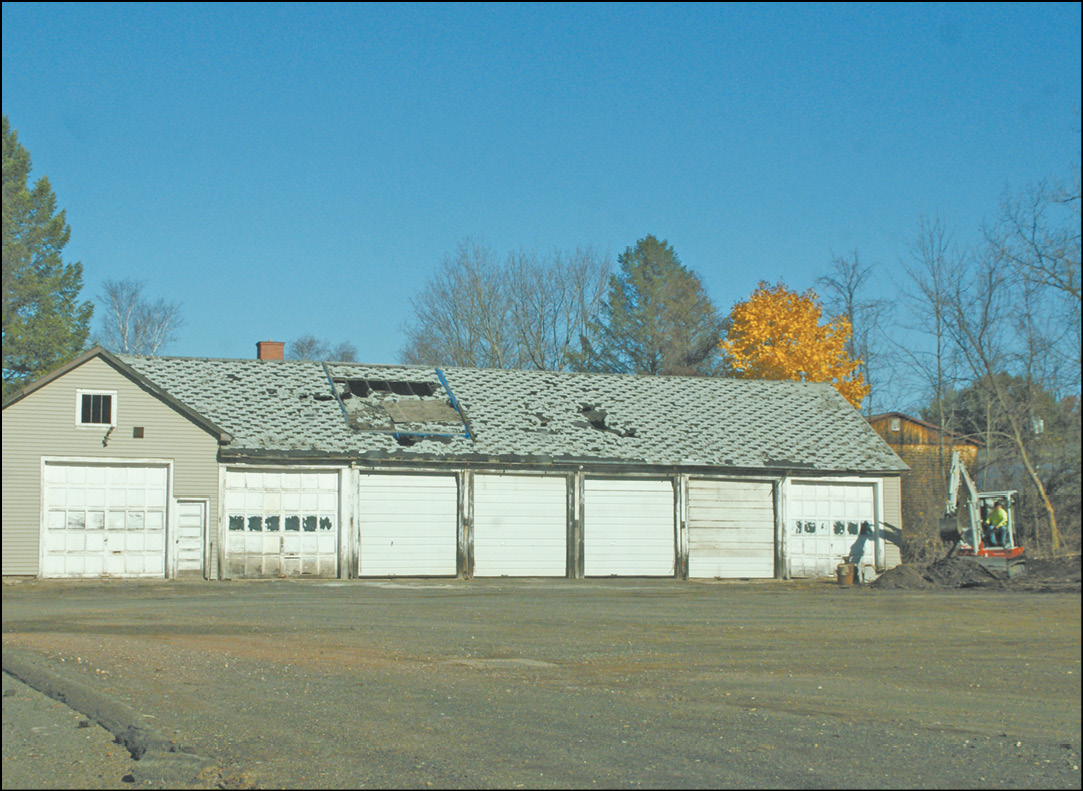 As viewed from Ffyler Place, Suffield’s derelict old highway garage is one of three buildings that have been reported to be a discouraging feature for potential developers of the empty space farther down the road. First Selectman Melissa Mack reported in the November 2 Selectmen’s meeting that plans were under way for the removal and hazmat remediation of this property. Some clean-up work has already begun.

Who among us doesn’t appreciate the beautiful new CVS on Mountain Road? What a fine job the company did, tailoring the new building to fit so beautifully into our town! But alas—every time we drive out of the parking lot, as we pause at the stop sign facing Ffyler Place, we are confronted with an eyesore: the tumbledown town-owned structures on the other side of the street, with accumulated bits of material strewn about. This is not the first time the Observer has mentioned the issue, and as always, the situation is much more complicated than it looks.

The demolition of the three dilapidated structures is indeed on the town’s master list of projects. Money to do the work has been allocated from Economic Development and is in the budget of the Department of Public Works. The hope is that the project can be completed sometime in 2017. So what’s the holdup? First, all three of the small buildings require abatement work before demolition can begin. There has long been a plan to move the highway garage facility, which would be the first step in the improvement effort.

Second, despite their woebegone appearance and the less than ideal condition of the surrounding area, all three small buildings house equipment used by the town, which means that alternative storage facilities need to be rented, leased, or otherwise acquired. Attempts have already been made to locate other storage sites, but to date no appropriate facility has been found. It is possible that some sort of temporary shelter for the equipment can be erected, though a site for that sort of thing would also have to be identified. We’re a long way from correcting the problem, but it is reassuring to know that a serious and thoughtful process is underway.

Third, and probably most significant, the Department of Public Works is addressing three other much larger projects that demand time, energy, and money: the problems with air quality in the Kent Memorial Library, the Town Hall renovations, and the proposed Bridge Street Community Center. It’s not hard to understand that the old storage buildings take fourth place on such a list. Let’s appreciate all that the town is trying to accomplish, and cross our fingers that the multiple challenges faced by the Permanent Building Commission and the Public Works Department can be resolved as early as possible in 2017.