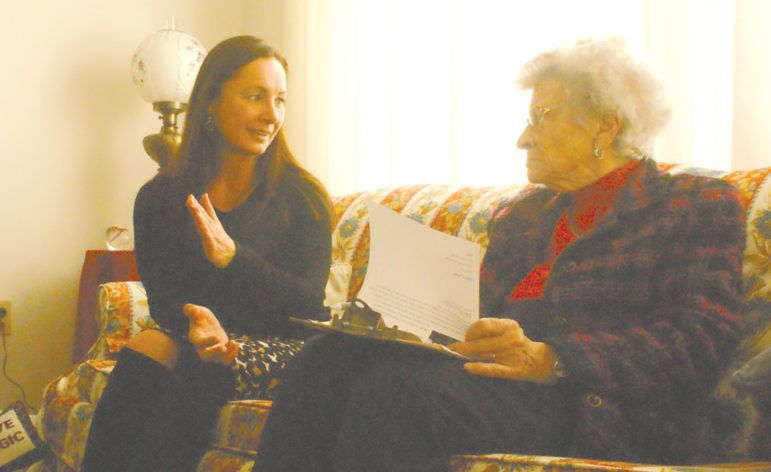 Elle Englander, left, describes her education in Stalinist Poland as she is interviewed by Mary Anne Zak.

Bright red knobs govern Elle Englander’s gleaming kitchen stove. In the oven and on the stovetop, Elle’s colorful Polish stoneware attracts guests to mouthwatering treats and delicacies she has prepared.

Red placemats, red flowers and vibrant table settings invite guests to sit down and enjoy her tasty hospitality. Elle’s culinary skills as well as her bowls, platters and plates come from her birthplace in Poland.

She was born in Boleslawiec, an hour’s distance from the Carpathian Mountains, where she took to skiing at the age of five or six. Her parents worked in the town factory long famous for crafting stoneware made of special clay in the region. Elle’s grandmothers lived in Boleslawiec, teaching Elle their cooking skills; they did not need recipes, and rarely measured ingredients.

Elle and her brother were born and brought up during the Stalinist regime. Their father strongly opposed the government. He was taken into custody one night when their home was surrounded as police took him away. The family did not see him for months.

In late 1982, Elle’s father was told that he could leave Poland forever or remain in prison throughout his lifetime. The family could have chosen to go to several different countries but after agonizing discussion chose to come to the United States. They settled in New Jersey, where Elle graduated from high school. She graduated from college and later married. In 1992, Elle settled with her new family in Suffield, welcoming sons Ryan and Kyle and daughter Hanna to their midst.

Elle remembers a fact of life in communist Poland.

To make a phone call, people had to apply for permission and an appointment. Three days were often required to obtain permission. Calling from a government station was scheduled and monitored. Letters sent in the postal system were opened and copied.

After the Polish Communist regime collapsed in 1989, Elle’s family renewed contact with friends and relatives. Later Elle began to import and market Polish stoneware from Boleslawiec. She is now president of Janelle Imports in Enfield.

Elle travels regularly to her birthplace in Poland, simultaneously maintaining her home and enterprise in Connecticut. Passionately proud of her Polish history, she cherishes her American history!

Elle is an inspiration.