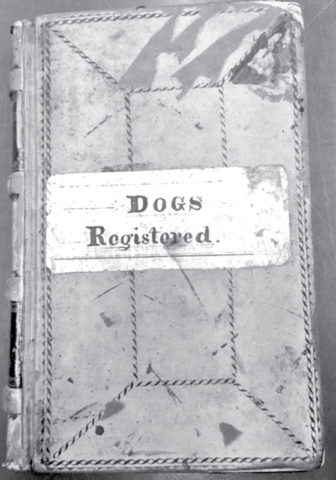 The Town vault contains a number of old volumes like this century-old dog register. 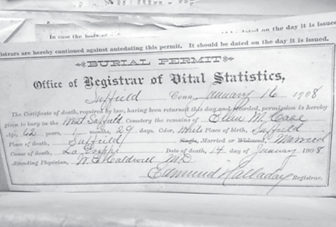 This 1908 burial permit is among the Town records often sought by genealogy researchers. Ellen Case, to be interred in the West Suffield cemetery, died of “La Grippe” on January 14th.

The Town Hall cornerstone notes the construction date of 1962. One can only imagine the treasures that have been stored away by our predecessors! With renovations lurking in the near future, the task of moving Town offices has brought forward several challenges on local, state and federal levels. How does one efficiently move a Town Clerk’s vault and its records dating as far back as the 1700’s while protecting these vital documents? Our inquiry began with contacting our State liaison who provided a rather long list of required procedures. Many of these requirements need to be met before attempting this monumental project. Starting with the documents being stored in the lower vault.

Now for a little history on the lower vault in Town Hall. The Suffield Police Station moved into the ground floor of Town Hall in April of 1963. A four-lane-wide shooting range (then state of the art) was installed and used by police officers until the early 1970’s when ventilation became an issue. On October 2, 1988, our Police Department dedicated their new building at 911 Mountain Road where they reside today. Over the years various offices have occupied the space vacated by the Police Department. The Probate Court created a secure area to house their probate records, taking control of half of the former shooting range now called the lower vault. Current offices use the remainder of the vault space to store various records. Unfortunately, we discovered by State regulations the lower vault, which is below ground level, cannot be used to house historical documents and records due to moisture, overhead pipes and various other issues.

Now on to the move, our first order of business was to determine exactly what was in the lower vault. Dressed in work jeans, t-shirts and disposable gloves we were up for the challenge. Once inside that dark dusty cave of sorts, we discovered a plethora of treasures from many years past. It was not long before we were amazed. We discovered paper burial records from the 1800’s, a book titled First Women’s Rights To Vote Register For Educational Matters of 1892, and the most interesting book a dog license journal from 1870. A photo of this journal is the cover for the Connecticut State Library’s 2016 annual report. It seems they are as intrigued by this record as we are.

Once we discovered these historically priceless documents the question became where can we store and preserve all of these hand written treasures.

We reached out to Library Director Jackie Hemond; with her assistance were able to find a home for quite a number of books and records that are not normally housed in the Town Clerk’s vault. Once the Kent Memorial Library is re-opened a number of books will reside there preserving a piece of our history. Also, our Assessor Helen Totz reached out to the Connecticut State Library where they graciously accepted numerous grand list books from years gone by and other materials that we are required by law to retain. Some of these books will require restoration that can be best handled by their agency.

Please feel free to stop by the Town Clerk’s office any time and appreciate the history of our wonderful town as much as we do!

Next Article
Library Renovation Update
The January 26 meeting of the Permanent Building Committee (PBC) was brief.