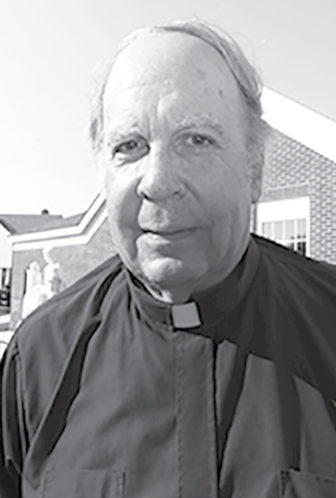 “My main goal is to become involved in as many ways that I can with all age levels” stated Father Mark Jette, the new pastor of Sacred Heart Church. He also expressed a desire to see more flowers in church, altar servers, and the bells rung at the consecration of the Mass.

Having been born and raised in Waterbury, a city that used to have 30 Catholic parishes, Father said that the city had a very Catholic atmosphere where many young men thought about becoming priests. He made that decision as a student at Sacred Heart High School where he was a member of the swim team.

After high school, Father Jette attended St. Thomas Seminary in Bloomfield for two years and then studied at Christ the King Seminary at St. Bonaventure University in Olean, New York. He was ordained in 1972. His first assignment was at St. Lawrence O’Toole parish in Hartford where he served for seven years. Father then was stationed at St. Joseph-St. Mary’s in Meriden for 23 years. Next, Father Mark was assigned to St. Lawrence-St. Paul Church for 15 years in West Haven.

Father’s assignments, except for Hartford, had schools attached to the churches. The Waterbury native coached baseball and basketball, taught confirmation classes, started the Living Stations with youngsters and a Christmas Pageant. He served the community as the Police Chaplin. While in West Haven he ran a basketball league for all catholic schools. Father Mark is looking forward to the upcoming basketball games at Suffield High School and Suffield Academy

Father has a love for sports. He enjoys golf and wrote the History of Golf in Meriden for the city. He has a true love of Ireland and its history and believes he has had the chance to visit there about thirty times. His family comes from County Kerry in western Ireland and he has a real appreciation for the beauty of the area.

As one of six children, Father grew up across the street from a rectory whose priests often were invited to dinner at his house. Many of these priests became good friends with his family and he feels that these men had an influence on his becoming a priest. He has called the Parish Councils of Sacred Heart and St. Joseph’s together to put forth ideas on what to do with the St. Joseph’s buildings and property which now belong to Sacred Heart.

Father is ready to become a part of Suffield and we at the Observer wish him well in his new assignment.

Next Article
What Goes Around: History
Lithe, limber and apparently youthful, five or six white-robed and hooded figures…