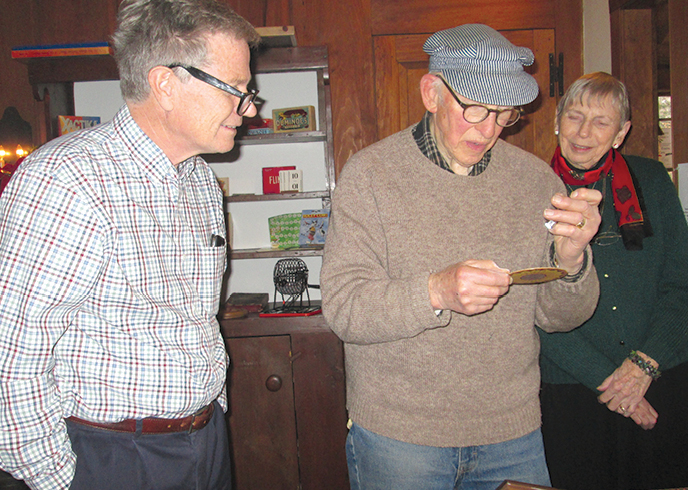 At the King House Museum’s annual Holidayfest on the first weekend of December, curator Lester Smith demonstrates “Chiromagica” to Chris Childs, left, and Jacquie Wadsworth. The mysterious 1905 game was one of the oldest in the event’s special exhibit: “Vintage Parlor Games.”

Did you play Candy Land or Clue when you were young? If so, you would have seen some old favorites at the 2017 Holidayfest at the King House Museum. This year’s theme was “Vintage Parlor Games,” and from the 180 delightful items that were loaned for the special exhibit, 135 were on display. The colorful games brought back memories to those who came to visit the King House on December 2 and 3, after which guests gathered by the cozy fire in the kitchen for refreshments and conversation.

The exhibit featured familiar games like Parcheesi, Pick-up Sticks, Go Fish, Cootie, Dominoes, Scrabble, and Old Maid. There were five versions of Monopoly: the classic game plus one in French, another in Italian, and two local creations called “Suffieldopoly,” as well as vintage games like Spots, Park & Shop, and the Royal Game of Goose. There were also unusual games like the United States Airmail Game, which was marketed by Parker Brothers just four years after the initiation of American air mail service in 1925. Several very old pinball games filled one of the glass display cases; in another you could see the Peter Rabbit Race Game, which was made in England. Labels by some games provided pertinent information and interesting trivia, such as the fact that “Uncle Wiggly” cost 67 cents in 1947.

Throughout the weekend curator Lester Smith gave frequent demonstrations of “Chiromagica,” but few people could figure out how the “magic” pointer always gave the correct answer. It was great fun! The King House has been hosting these annual Holidayfests for most of Smith’s 30 years as curator of the museum. Like the popular Ice Cream Social on the King House lawn each July, this December event draws the community together. What will the theme be in 2018?