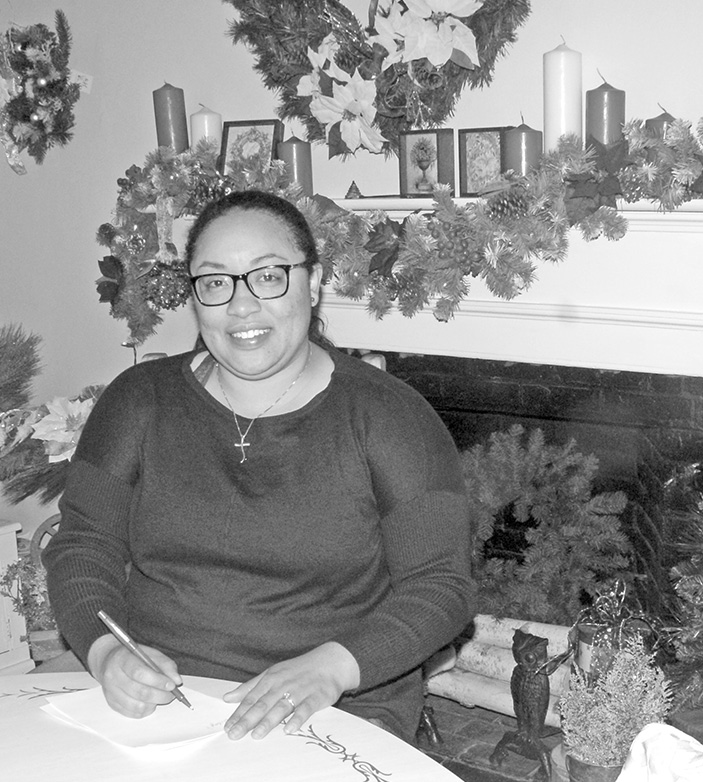 Proprietor Erin Fletcher is pictured in the consultation room at K & P Flowers and Gifts, the deceptively large florist business in an antique home on East Street South.

K & P Flowers has been in Suffield for quite a few years, but for almost a year now has had a new owner. She is Erin Fletcher, who grew up in Bloomfield and now lives in Hartford.

Erin’s interest in flowers started at an early age. She went to Bloomfield High School, where she was in the VoAg program and in Future Farmers of America. As a hobby she was arranging wedding flowers; at her first job at Moscarillo’s in West Hartford, her mother had to drive her to deliver the flowers to the wedding since she was only 15.  She went on to UConn, and received a degree in horticulture.

She has worked at flower shops all over Connecticut. In 2015, she was working at a shop in Wethersfield and was in negotiations to buy the shop, when the owner changed her mind. The owner then let her go, assuming she would want to move on. After that it was a job at a wholesaler, where she became a manager and hoped to eventually run the building. Karen Lewandoski of K & P Flowers had been one of her customers, and eventually she bought Karen’s business.

K & P Flowers is not only a floral shop but also a gift shop. In addition to arrangements for occasions they have an extensive gift shop. They are connected with FTD, but as a local shopper you may go there to order and receive special attention. Besides herself, Erin has two very talented designers who came with the business. Her mother is still doing a lot of the driving.

Next Article
Boxed out of a holiday tradition
Andy Sauer In England, Boxing Day, the day after Christmas, is kind…