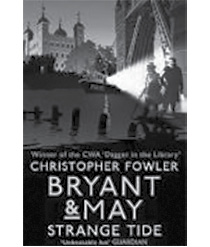 Arthur Bryant and John May are detectives in the Peculiar Crimes Unit in London. The whole unit is a little eccentric, and Bryant it is generally pretty much off the charts eccentric. But he does have a knack of solving crimes. However he is now suffering with a medical problem that is affecting his mind and he has been ordered just to stay at home or his office. Keeping him off the streets however proves to be challenge. In spite of May’s efforts he keeps sneaking away.

The crime that needs to be solved is the drowning of a women in the Thames. She had been found chained to a rock by the river and, of course, when the tide came in she drowned. Later a man is found around the same area and the crimes appear to be connected. This is such an entertaining book because in addition to being a good mystery there is a lot of information about the history of the Thames and surrounding areas and it is also at times very witty. I am reading Fowler’s next Bryant and May’s series and it is equally entertaining. In this book Bryant has managed to solve his own medical problem and although still having a few troubles is back to solving the next crime. He and May have worked together for a long time and are a great team. May manages to keep him a little in check.

Lois, one of our librarians, recommended this author to me and she really hit the mark with this one. 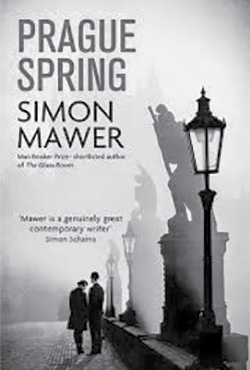 This novel begins in England. The year: 1968. Two students at Oxford, James and Ellie, have had the leading roles in a play that has just finished its run. Now, with a long vacation ahead, they decide to travel together, hitch hiking across Europe. James hopes to get to Italy, but Ellie has other plans. Then the story switches briefly to Czechoslovakia to introduce some other key characters: Sam, First Secretary at the Prague British Embassy and Lenka, a Czech student.

Now back to James and Ellie who travel through Belgium and then into Germany. As they are crossing southern Germany one of the cars that stops for them has a surprise.

Riding in the car, driven by her nephew, is a world famous musician. They learn that she will soon play in a concert in Czechoslovakia. Thus James and Ellie decide to head toward Prague.

Now the story quickens. In l968 Prague was still the beautiful and historic city it had always been, but its citizens had suffered dreadfully during the years of Hitler and the war. Now the people seemed happier, and hopeful that they might soon have more freedom. But Russian troops were on the border and stress was mounting. What happens next is frightening. This story is stunning. I highly recommend it.