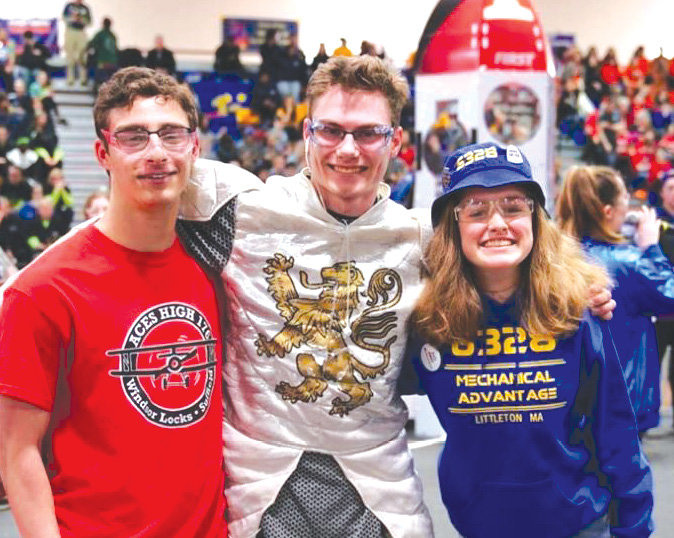 A happy trio! Pictured on March 24 in Springfield at one of the FIRST Robotics regional competitions are members of the three teams in the winning alliance. From the left: co-author Matt LoVoi of Suffield-Windsor Locks Team 176 ( Aces High), Todd Bade of Southington High School Team 195 (CyberKnights), and Maddie Tuck of Littleton, Mass. Team 6328 (Mechanical Advantage). Matt’s and Todd’s job was to scout other teams to help in choosing alliance partners; Maddie was a pit crew member. Aces High went on to become a member of the runner-up alliance in the New England Championship three weeks later.

Aces High, Team 176, the joint Windsor Locks/Suffield FIRST robotics team, has really “owned the sky” this 2019 season. Aces was seeded first in the first two competitions that we competed in and dominated the Western New England University District Competition in Springfield. With 30 elite teams from the New England area, Aces High won almost every match by a landslide and showed their full potential in the finals matches, securing the victory for their hometowns.

When traveling to Worcester on April 10, where the top 64 teams in New England competed, we had our sights set on doing some serious damage. The competition was fierce. There were multiple matches that came close to breaking the world record score, 110, and finally towards the end of the competition it was broken, a long awaited and expected feat.

Although Aces did not break it, we were truly a force to be reckoned with. We bounced around the top eight during the three days of qualification matches, ranking first at one point. During this time over seven members of the team rigorously scouted each and every team competing against 176, using an app one of our mentors created. Sometimes sitting for over eight hours, these scouts were able to form a list of teams to align with. With up and down qualification matches, after our last match we were seeded seventh, a drop from second, and causing much distress in the team.

Soon after our last qual match, Team 176 headed into alliance selection. As each team was picked, our success in the playoffs seemed to trickle through our fingers. When it came to the fourth alliance, the Gaelhawks, Team 230, was the picker to choose two more teams to make their three-team alliance.  We knew this was our final chance at having a glimmer of hope in the playoffs. Aces High had worked with the Gaelhawks, of Shelton, in the past, and this paid off. They selected us first, and because of scouting they were able to pick a third partner, Team 4311, a fantastic defensive bot. Teams 176, 230 and 4311 prepared for the playoffs.

The first round was a breeze for the fourth alliance, as Aces and company beat their friends from Team 177, of South Windsor. The semi-finals were a different story as Aces High went up against the top two teams in New England, Team 195 from Southington, and Team 319 from Alton, New Hampshire. Aces had a feeling that we didn’t stand a chance to make it to the finals. Amazingly, we did the impossible and beat the other alliance twice, and headed for the finals.

In the finals matches, Aces was able to steal one, but ultimately lost in the best two out of three contest. Although it was a crushing loss, Aces still brought home silver medals and ranked fifth in all of New England. At Worlds, in Detroit, we will again be a force to be reckoned with. Make sure to tune into Aces High, Team 176, at thebluealliance.com, starting April 24.

A special thanks to the Amiel Zak Fund and other sponsors, and Go Aces High!