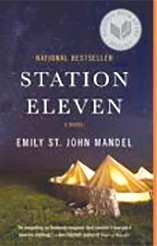 This is the kind of book I don’t usually pick to read. However I had just finished a novel and was looking for another when there in front of me, on my coffee table, inexplicably, was this book and I picked it up and started to read.

There is a deadly virus sweeping through the world and few are able to escape it. There are two groups that are followed in this tale. One is composed of musicians who travel around and play music or perform plays, usually Shakespeare. The second group has been on a plane that has been diverted to an airport in the mid-west which is now deserted. There are others who are moving around the country trying to find a place to settle and of course, those who are dangerous and to be avoided.

There is continuity in that there are characters before the “fall” who are there afterwards in each of these two groups. One of the main characters is Arthur, who was a Shakespearean actor who died just before the virus hit, but had three wives and a child and also friends who are survivors and in one or the other, of these two groups. Arthur is often referred to. At times the novel was confusing, because they used different names. The musicians often referred to each other by the name of the instrument they played.

Their lives as survivors were written about for 15 years and they continued to live a primitive life. Since the beginning of the novel was set in modern day America, I wondered why there were not people who were able to follow up on civilizations progress such as electricity. Surely someone could manage a wind turbine to supply power.

I’m glad I found it on my coffee table because I ended up liking it very much – C.M. 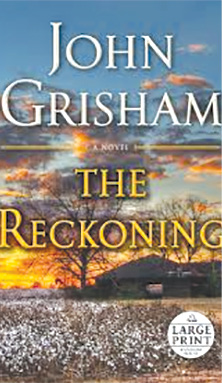 This is a novel about a family named Banning who lived in northern Mississippi. They owned a large and profitable farm that had been in the family for five generations; Part one of the book begins with a terrible shock when Pete Banning, the main character murders his pastor, Dexter Bell, a man who had been his friend and was highly regarded by all. Arrested and taken into custody, he is asked why he killed the pastor. His only reply is “I have nothing to say.” Throughout his trial and until his execution that will be his only reply.

Now, in part two, the story switches back to 1925 when Pete was 22 and had just graduated from West Point. Shortly he meets Liza who will become his wife. They will be a devoted couple. Pete loves being in the army and so does Liza, but in 1929 after his father dies and the Great Depression descends, it is imperative that he return and take over the farm. By that time they had two children – a boy, Joel and a daughter, Stella. Near the farm lives Florrie, Pete’s sister, another important character.

By 1941 things were going very well on the farm, but war looked imminent. As a reservist Pete knew he would be recalled. His orders arrived and he was sent to the Philippines to be stationed on Bataan. Within days of his arrival came the news of Pearl Harbor, and on December 22, thousands of Japanese troops came ashore. This section of the book is frightening. After the Bataan death march, the Banning family is notified that Pete is missing and presumed dead. But in 1945, they joyfully receive the news that he is alive.

Now in part three, the story switches to 1946 again. In 112 pages the reader will find out what happened to the Banning family after Pete was executed, and also the answer to the question he refused to answer. This is an unusual book. Although parts are very sad, I found it hard to put down.

Next Article
Palm Warblers and Other Strangers
When my brothers and I were growing up, my parents were not…