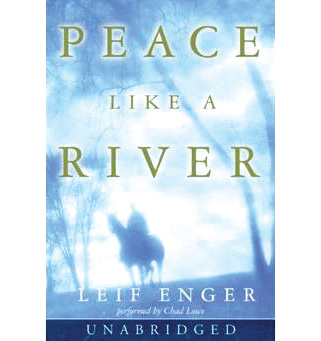 This is the kind of book that is a pleasure to read because in addition to a good story Enger is a wonderful writer and it has very engaging characters.

It is about a family living in the Midwest in 1951. It is narrated by Rueben, an 11year old boy who lives with his father, his brother Davy 16, and his sister Swede who is eight. Their mother left them after Swede was born and has never been heard from since. Maybe it’s because they live in a rural town in the Midwest, but somehow it seems like an earlier age. The children are so responsible. Davy, especially, seems older than his age and the whole family is very close.

But things fall apart when Davy commits two murders. There are some extenuating circumstances, with the first murder but, since he killed twice, he ends up convicted and will probably spend most of the rest of his life in prison. Rueben and Swede are trying to think of a way to break him out of jail, but can’t. Davy, though, breaks himself out and is on the run which causes a huge manhunt.

Rueben and Swede and their father also go on a long and eventful journey to look for him.. A few months before they get to leave, though, their father becomes very sick and during his illness and long recovery period, between the two of them, they manage to take care of him by themselves with Swede cooking and Rueben getting a job that at least puts some food on the table. As I wrote, they do seem very capable for their ages, especially Swede who can run a household at eight. There is also an FBI agent who once they start out tries to follow them to see if they will lead him to Davy.

Well things, more or less work out, although there is an incident in the end that takes a little leap of faith to believe but still a very wonderful “read.”               – C.M.

The Matriarch, Barbara Bush and the making of an American Dynasty by Susan Page. Hechette Book Group, 2919. 338 pp.

This book is the story of a remarkable woman. The book’s author, Susan Page, had at least a hundred interviews with friends of the Bush family and family members themselves. She talked for many hours with Barbara and had access to her diaries. In the beginning one reads about Barbara’s childhood, her growing up in Rye, New York in Westchester County. She was the third of four children. Her older sister was quite beautiful, as was her mother, but Barbara was pudgy and overweight. Her mother always favored the sister and fussed over Barbara’s weight. But her father adored her.

She met George Bush at college and would drop out of college to marry him. They would have six children, but one of them, a girl named Robin, died at three years of leukemia. This was a tragedy that had a life-long effect. At first their marriage was similar to most others of that time – “she ran the household and he called the shots,” to quote the author. But eventually she would become an important advisor to her husband. According to the author, one of his White House aids said “she was about the only voice he 100% trusted.” Most of those who knew them best say that it would have been unlikely for George Bush to have accomplished all he did if he hadn’t married Barbara. Another quote is that she turned out to be one of the most interesting and influential women of the twentieth century.