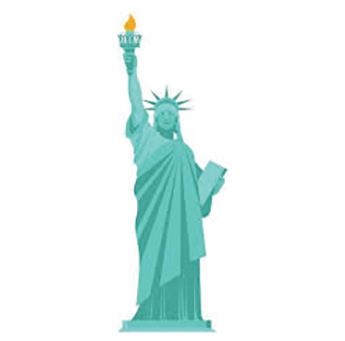 This past May, my wife, Beth, and I had dinner with my cousin’s son, Presston in Brooklyn. At dinner, Presston shared his latest job adventures. For the past four years, he was one of the project managers for the new Statue of Liberty Museum. He was both excited and stressed about the project that was to officially open to the public later in the week. The following day, he would meet with reporters from the major papers like the New York Times and others as well, as setting up interviews for the major television networks.

The opening went very well according to the newspaper reviews he sent. The New York Times wrote extensively about the new museum and had glowing words for it. It was interesting to learn not only about this new historical collection of Americana, but to illustrate how history often gets re-interpreted, and facts and meaning can lose their original intent sometimes.

When we think of the Statue of Liberty, most Americans, like myself, think about its message for immigrants arriving in our country in the late and early 19th and 20th centuries. Many Americans are familiar with Emma Lazarus’ poem written in 1883, The New Colossus, which includes the famous line describing the statue as welcoming the, “huddled masses yearning to breathe free.” The poem was in part written to raise funds for the construction of the statue and is displayed on its base.

There is a very different reason the Statue of Liberty was conceived: one with which most Americans, including myself, are not familiar. According to the New York Times article by Julia Jacobs written on May 1, 2019, “Rene Lefebvre de Laboulaye, the legal thinker of the statue, was a staunch abolitionist who was known in the United States for his Civil War-era pamphlets defending the Union cause.

“In an early model of the statue by the French sculptor Frederic-Auguste Bartholdi from 1870, Lady Liberty is depicted holding broken chains in her left hand, a clear reference to emancipation. Bartholdi based the statue on the Roman goddess Libertas, who is usually depicted wearing a Phrygian cap, traditionally worn by freed Roman slaves.

“In Bartholdi’s final model, the broken chains in the statue’s hand were replaced with a tablet that represented the rule of law. Bartholdi placed the broken shackles and chains beneath Lady Liberty’s feet, making it nearly impossible for visitors to see at most angles.”

Here is an example of how history takes on new meanings, losing their original intent. When you are in New York City, visit this wonderful addition to our history on the Statue of Liberty Island. The museum is free, with many fascinating exhibits. Tickets to climb in the Statue are limited for security reasons since 911. I find the more I read history the more there is to learn and that meanings can change over time.

Next Article
Planting Flowers by the Soldier’s Monument
From the left: Kathy Remington, Kathleen Horrigan and Judy Edwards pause while…