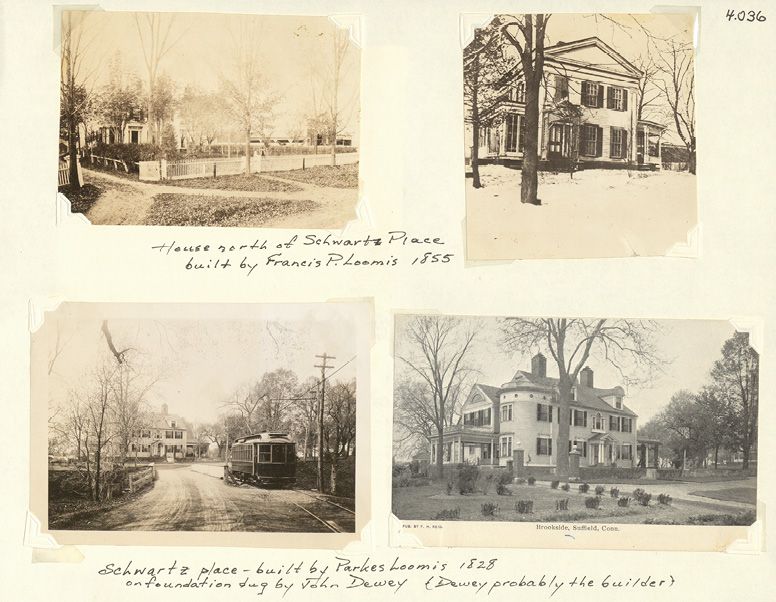 Page 36 of Delphina Clark’s photo album features two houses near the Boston Neck Dam. At the bottom is the impressive Schwartz home, called Brookside in its heyday.

Delphina Clark’s photo albums are a great resource for studying old homes in Suffield, but they aren’t easy to use.  The Suffield Historical Society is seeking volunteers to help correct that difficulty.

Delphina (1892-1984) was a graduate of the Yale School of Architecture and became a long-time resident of Suffield, moving here about 1933. She lived first on North Street and then on Hill Street, each time restoring a great old house. An effective preservationist, she joined the Antiquarian and Landmarks Society and helped with the restoration of the Hatheway House in Suffield and two other Landmarks properties.

Passionate about old homes, she assembled six photo albums of Suffield houses and typed eleven volumes of notes on Suffield land records. They are all now part of the Kent Memorial Library archives, but available recently in the King House Museum during the KML construction project.

The albums contain about 1,900 photos, annotated selectively by Delphina with data such as dates and residents, and organized by street.

Art became aware two years ago that the photos had never been scanned.  Now, through a project supported by a grant from the Amiel P. Zak Fund to the Suffield Historical Society, the photo albums have been scanned into a digital record.

To provide accessibility, the project is now generating an index.  We are working to include house numbers, as most streets did not have numbers when Delphina started her work and other numbers have changed.  Present-day house numbers will make the index very much more useful.

A few volunteers have begun this work, but we need more.  If you’re willing to help,  please call or write me at 860-668-9414 or ArtSikes@aol.com. I can provide resources to help in the work.  We hope to make the albums available online so they can be easily searched by anyone interested in old Suffield homes.