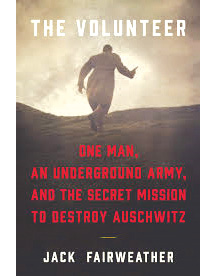 This is a true account written by Witold Pilecki that had been kept hidden, until a few years ago,  when it was discovered Fairweather had written the book. He did meticulous research to confirm that what was written is accurate. The account is primarily  about Witold’s time as a prisoner in Auschwitz.

Witold Pileciki was a 39 year old Polish officer who fought in the losing battle against the Germans when they invaded Poland. He then joined the resistance and was subsequently asked by the group to get inside Auschwitz and organize an underground resistance group and try to get information out about the horrors that were happening there. It was essentially a suicide mission, but he managed to get swept up in a raid and was taken there where he survived for two and a half years.

Of course there have been many stories about the Holocaust  – most notably Elie Weisel’s – but Witold’s accounts are so detailed and brutal that I wondered how I could keep reading. I think it was so hard to process quickly that I just kept going. One of the incidents was about the time that Himmler was coming for an inspection. The Germans selected the most healthy prisoners they could find, had them take showers – which they were never able to do – and gave them clean clothes. While lined up for his visit it was noticed that one prisoner was missing a button on his clothes, so someone took him off and beat him to death. I know these were soldiers who followed Hitler, and there are always thugs and bullies, but how can there be so many who seek out and enjoy this brutality?

The other part of the account was how Witold managed to form an underground. It was amazing. Prisoners had jobs in the camp and they were able to use the jobs to undermine the Nazis’ operation and to get information out. One prisoner was almost able to build a shortwave radio. He needed two more parts, and it took him six months to get them. Sadly, even though they got the information out of the camp in various ways nothing was done to help them. Roosevelt and Churchill thought it was more important to concentrate on the war effort, and the Pope did not want to offend Hitler. In the meantime thousands and thousands and thousands of men, women and children were being killed.

Witold was the bravest and most resourceful and as good a man as you could imagine, yet he was never able to live out the peaceful life with his wife and children that he so deserved. This account will stay in my head for a long time.

This is a remarkable novel. The main character, Ifemelu, is about to finish her fellowship at Princeton. She has been in America for a number of years and has now decided to go back to Nigeria, her home country. As the story unfolds the reader learns about her childhood, her mother and father, and her other relatives, especially Aunt Uju, an important character, and her close friend Obinze. This is a young man whose admirable character is really impressive. Ifemelu began college in Nigeria, but there were two strikes that shut down the school for months, so she decide to apply for college in America. Obinze hoped to go too, but it did not work out because of restrictions after 9/11.

When Ifemelu gets to America she first stays with her Aunt Uju who is working to get her medical degree. Later she helps Uju care for her little boy, Dike. Her years at college in America were a real success, but, as the author writes, for the first time in Ifemelu’s life she deals with what it means to be black. During her last years in America she began posting blogs which became very popular.

The last part of the book, when Itemelu has returned to Nigeria, is very interesting and has a satisfying ending. There were many things in the book that surprised me. Reading about her years in America was  an eye opener for me as it gave me a sort of insight into the lives of immigrants and how strangely Africans and other black immigrants view us and how little we understand them. Hopefully as time moves on the situation will get better and more sensible.

The author grew up in Nigeria. Her work has been translated in 30 languages. She is divides her time between the United States and Nigeria.

Next Article
Sunflower Snack
A tree swallow bids farewell to Hilltop Farm and summer, ready to…