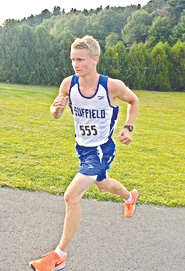 “Winning decathlon was a big goal this season, and just doing my best,” explained Jared Sharp when I asked him what he wanted to accomplish at the start of the 2019 Outdoor Track and Field season. Jared, a senior at Suffield High School, has been competing and excelling in Track and Field since middle school. This past school year, his indoor 4×800 meter relay team won the New England Championship, and placed sixth at the Newbalance National Championship Meet. But Jared’s victory in the state decathlon competition marks a special milestone for him.

“My favorite thing about Track and Field is that it’s mentally challenging.” Jared’s main event, the decathlon, epitomizes the pain and struggle of track and field because it includes events of all types: Jumping, throwing, sprinting, long distance running, each of which requires a uniquely difficult training approach to do well. But the challenge of decathlon is not limited to the physical discomfort of training; it also requires that one have the mental fortitude to overcome the psychological hurdles of competition. During our talk Jared admitted that there were a couple of events in which he was intimidated. “The first event, the 100 meter is probably my worst event. About half of the people at decathlon are long distance focused, and the other half are field or sprinting focused.” Jared went on to share that most of the sprinter-focused competitors beat him in the 100 meter, and the same was true for throwing-focused competitors in throwing events. But Decathlon isn’t necessarily about beating everyone in individual events. It’s about doing the best that you can do. Jared kept this in mind throughout the competition. Of course beating competitors is fun, and it can be useful in pushing you to do your best, but you can only give what you have.

With that being said, Jared must have had a lot to give, because he did his fair share of beating competitors in individual events. He was the top scorer in the long jump, setting a personal record of 20 feet and 10 inches. He also won the 1500 meter (one straightaway shy of a mile). Right before the 1500 meter, Jared found out that he was in the lead, having scored the most points so far at the meet. This took some pressure off him. “I knew that if I was in the top three for the 1500 meter, about 300 meters away from the fastest runner, I would win it.” But winning was not his only goal – he wanted to leave the meet knowing he did the best he could have possibly done, so he gave it his all and ran a staggering four minutes and 18 seconds in the event. He was also the second highest scorer in the 400 meter, running the race in 52.11 seconds, and the pole vault, pole-vaulting 12 feet and 5 inches. By the end of the two-day competition Jared racked up 6027 points, 483 points ahead of second place. For next year’s decathlon, he wants to improve his times in the 100 meter and 110 meter hurdles, events in which small time improvements equate to substantial increases in points earned. Jared plans on competing in the decathlon at the college level, and is looking at universities in the west.

After talking about track and field, I asked Jared to share a little bit about himself and his values. Without hesitation, the first thing he said was, “I put family and friends first.” This response speaks to Jared’s depth as a person. It shows that who he is extends far beyond his athletic accomplishments. I think that all of Jared’s classmates and peers, myself included, can attest to his exceptional citizenship. The kindness and respect that he routinely exhibits in school and on the track is truly inspiring. Though he is a pleasure to be around, looking back to when I ran track a couple of years ago, being around him was quite difficult because he tended to be so far ahead.

Next Article
Irish Athletes Visit
For a week in early August, Suffield was the focus of a…