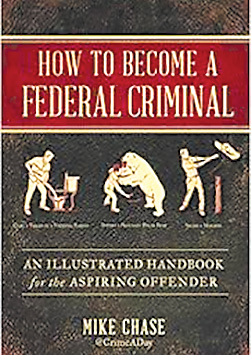 Mike Chase, Suffield native and author of the book How to Become a Federal Criminal: an Illustrated Handbook for the Aspiring Offender, spoke to an appreciative audience at Kent Memorial Library on Thursday, November 7. The talk was sponsored by Suffield Public Library Foundation as part of their yearly speaker’s event. Mel Chafetz, president of the Foundation and one of Mike’s former school principals, introduced Mike, and Carl Casinghino, another Foundation member and one of Mike’s former teachers, made further introductions along with some personal comments about their connections both at Suffield High School and since Mike graduated.

“Mike spends his days as a white-collar criminal defense lawyer. He is also the legal humorist behind the @CrimeADay Twitter feed, where he offers up a daily dose of his extensive research into the curious, intriguing and often amusing history of America’s expansive criminal laws. Mike’s work has made him the go-to commentator on the countless weird and esoteric federal criminal laws buried deep in the books. He’s been a featured guest on American Public Media’s The Uncertain Hour, published in the Wall Street Journal and more.” from Google Books

During his presentation, Mike regaled the audience with some of the many ways one could become a federal criminal. For example, you can go to jail for sending a mongoose through the mail. Don’t do that. It’s also against the law to clog a toilet in a national forest (you could get six months in a federal prison for this) or import a pregnant polar bear (which, as it turns out, determining whether a polar bear is pregnant to begin with is really hard to do), so it’s safer not to do any of these things. Have you written a letter to a pirate? You could get three years in the slammer. It’s also a federal crime to knowingly participate in the use of an airplane to harass a fish. All these are very real crimes for which you could do federal time.

Mike’s @CrimeADay features one of these federal criminal laws every day, and he explained to his audience that if he continues to post one law per day as he has been since 2014, he figures he should only take him 800 years to finish, unless more laws are put on the books, which is probably likely.

Mike’s book, How to Become a Federal Criminal, would seem to be a must-read for any of us who want to stay out of jail!