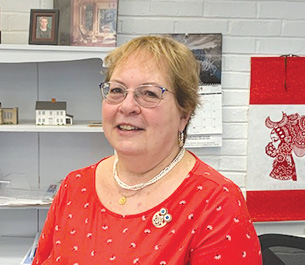 Retiring Library Director Jackie Hemond is pictured in her office.

Jackie’s retiring. Not an idea I was ready to deal with when we got her resignation letter in October. As president of the Friends of KML, I have been impressed with the number and variety of programs Jackie and her staff continued to provide, even though they were housed at Ffyler Place in a temporary situation for almost five years while the “big house” on Main Street was renovated and made usable again.

Jackie grew up in Suffield. Her mother, Elaine Ives, her brother Roger and sister, Cathy Beaulieu, still live here. Another sister, Missy Moxley, lives in Maryland. Jackie got her B.A. in History at Wells College in Aurora, N.Y. and her first real job was at an ad agency in Hartford. After working there for a short time, she applied for a job as a librarian in East Windsor. Because she had no degree in Library Science she wasn’t hired, but it spurred her interest in the area, and she went back to school to get her Masters in Library Science at Simmons College in Boston.

Jackie has held a variety of librarian positions, including working in a government library, two business libraries, five public libraries, as well as one college library.

Jackie married David Hemond in 1987, which brought her two step-children, Liz, who now lives in Turkey and has one child and Matt, who lives in the Boston area and has twins. The three grandchildren (now five-years old) were born within a week of each other right when Jackie was being hired for the Kent Memorial Library Director’s position.

Jackie and David have two children, Eric and Amy. Eric lives in Agawam, and Amy, who lives in Montreal, Canada, was recently married to Alejandro Velez from Colombia.

Jackie and David have lived in the New England area most of their married lives, but recently traveled to Turkey and Ireland, and Jackie has traveled to England with her sister and brother.

Besides being a recognizable library face, she is also involved in the Suffield community. She is the vice-president of the Suffield Historical Society and is the liaison from the Town to the Town’s 350th Committee. And, we hope to get her involved at the Observer as well!

In her spare time, Jackie likes to garden, cook and read (obviously!). She also enjoys both classical and jazz music. In retirement, she plans to spend time helping to care for her mother and hopes to do more travelling with David to visit their international family.

As far as her library work, she feels that library programming, especially the adult programming, has been her special interest. She likes that the library has been able to collaborate with other groups in town, like the Senior Center, the Baptist Church, the Hatheway House, the Farmer’s Market (with their pop-up library), with Youth Services and Parks and Rec.

There are many groups like book clubs, photography club, and Socrates Café, to mention a few, that call the library their home, and Jackie and her staff are always looking for ways to connect to people’s interests.

Finally coming back to the building on Main Street after such a long stretch of time was wonderful. “The building is a wonderful space, iconic, inspiring and pretty – with spaces like the atrium,” Jackie said. While there are still challenges, like the lack of storage, Jackie and her staff continue to push forward to make sure the community is served and resources are available.

“This job is not a career, but a vocation. I have enjoyed working with the staff and the community, and I don’t plan to step back from being involved.”

Speaking for the Friends of KML, and I’m sure many others in town, we wish Jackie a relaxing and enjoyable retirement. Her last day is Friday, December 13. We’ll miss her at the library.

Next Article
Suffield’s 350 Anniversary Holiday House Tour: A Stroll thru the Centuries
There will be something for everyone to see and enjoy on the…