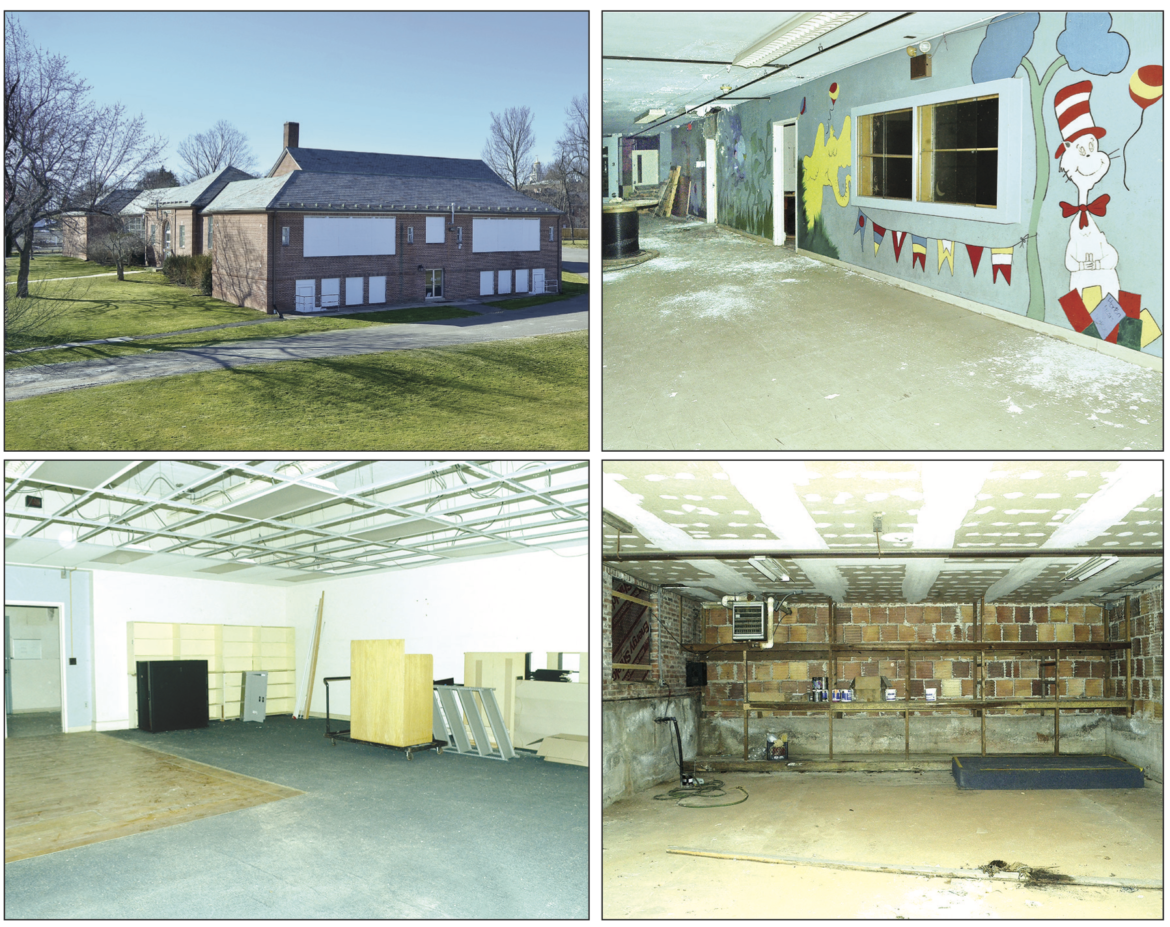 Bridge Street School (viewed from the southeast above) was built in 1924 from the design of renowned architect Walter B. Chambers, whose creations were built to last. A Connecticut Historic Building registration of the school is pending. Wall paintings in the main hall (upper right) livened the spirit of the old school. Recent unheated winters and neglect have caused paint to peel and floor boards to buckle. The former library (lower left) and other spaces were most recently used for Town storage. Neglected drainage issues have allowed efflorescence in the basement (lower right). Often confused with mold, efflorescence is not toxic and can easily be cleaned.

Democracy is so highly prized in our society; it is the very fabric of our collective consciousness. Our handheld devices alight with global breakdowns, gridlock, and civil rights strife. If a threat to the democratic process occurs here in Suffield, it becomes pertinent to address it locally. This account was precipitated by questionable official actions made. It has hindered and thrown into confusion, affecting a binding resolution passed by voters in 2015. The following summary is about Bridge Street School (BSS). The source is a 20-year journal of discovery and documentation.

After the 2005 School closing, an immediate call for what would become of BSS occurred. Official study report #1 concluded NOT to divest of the property, and deemed it “a valuable Town asset.” Structural integrity, planning for usefulness, and preservation for future generations was the finding. Scores of residents advocating culture and humanities latched on. Parks & Recreation having their own gymnasium, sports, arts, and enthusiasts for “screen less” youth activity imagined the opportunities – plentiful space for the development of social skills and self-expression to flourish. The Library Friends and Town offices needed space. Facilitated by a 501c3 Group, with grants, fundraising, and volunteer staffing, it would become largely self-sustainable.

Between 2007 and 2011, resident committees labored on various alternate use plans. They failed approval or were ignored. Land sell-off? Acquiring prime town center location did not escape attention from speculators for commercial development. It’s a very competitive market. A 2018 interview with past town real estate consultant and community leader, Janet Banks, offered an opinion. “A town center lot sale made under current local political and financial influence would unhinge our community. Letting go of the property would be bad for the Town.”

There was a 2012 proposal to sell for development that was defeated by a three to one Town Meeting vote. Following that, a surge of resident organizing, town information meetings, websites, and debates led to a 2015 Town referendum. It passed by nearly 10 percent to finally resolve the question.

A then candidate for First Selectman, Mrs. Mack, campaigned with “…I applaud the efforts of the Bridge Street School Committee and congratulate them for their hard fought victory. The community has spoken and I encourage everyone to respect the vote.” Mrs. Mack was elected on that promise. Gradually preliminary cost quotes were secured. The committee goal-focused on CMR (“Construction Management at Risk”) In this process, architects, engineers and contractors keep a plan on time, and within a strict budget. The project had met the approval of all Town Boards & Commissions. A contract was delivered in August 2017 to the First Selectman requiring a signature and a deposit to begin the design work.

Regarding any reason to pause here, the appropriate action as outlined in Town Charter (Section 502, Sub D) would be for the entire Board of Selectmen to discuss approval or not of the contract. That meeting was bypassed. What occurred instead was a September 14, 2017 release of a First Selectman proclamation stating the project would not go forward. Following these actions, $640,000 in acquired grants, pledges, and in-kind gifts were disrupted. The Friends of Bridge Street School expressed their concern re: two reasons why this action should be considered carefully.

1. The substance of discussion belonged in the boardroom, for approval or disapproval. This is why we have a five-member board. In the BOF meeting minutes of September 13, 2017, Mr. Childs reminded Mrs. Mack, “There was not a vote on this by the Board of Selectmen.” The First Selectman does not have a single-handed veto power.

2. This unprecedented move put the issue back on the debate stage causing confusion and divisiveness. Taking a risk to impose that one opinion alone can decide which resolution is affected and which is not, falls far outside the powers and duties of the First Selectman.

This action could seriously put the Town at risk for a lawsuit. The design aspect of the project was unilaterally halted without full board approval, and before getting actual cost figures. This decision was based on Mrs. Mack’s supposition that costs would exceed the bond amount. In fact, the scope of the project could be tailored at that stage to ensure, with contingency, that it would not. The Town Hall project, also passed in 2015, has been given much less scrutiny. The record shows the First Selectman proceeded with plans and expenditures on that project. The early cost figures exceeded the Bond figure by 70 percent. And those extensive plans were scrapped and revised.

At the October 16, 2019 Board of Selectmen’s meeting held at SHS auditorium,  “Respect the Vote” changes to “Rescind the Vote.” Presenting poor quality photos and unqualified opinions as grounds for demolition of BSS raises a question on a lack of accountability. A First Selectman is accountable to voters. Why were budget requests to remediate the building not previously made? Why was funding to advance the design stage for final cost figures not procured? Why was the full board excluded from the process? The upcoming vote is not an up or down Community Center question. This “rescind” referendum decides if we give our First Selectman a single-handed veto power.

Next Article
Handbell Choir Concert
What is the ultimate team “sport”? A handbell choir! You’ll be forgiven…