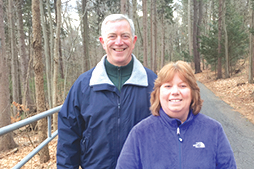 Park Superintendent Thomas Drakeley and his wife Maryfrances are pictured at the entrance gate to Sunrise Park, where he has served the town and the park for 14 years.

Thomas Drakeley has announced his retirement as superintendent of Stony Brooke and Sunrise Parks after having held the position for 14 years. Tom, with significant assistance from his wife Maryfran and their three now-youthful adult children, Sheila, Molly and Thomas, have served the town and park visitors splendidly throughout those years and will be greatly missed.

A lifelong resident of Suffield, Tom leaves behind a legacy of deep caring for Sunrise Park and all its resources. During his tenure, Tom oversaw and was instrumental in many improvements at the park, such as the rehabilitation of the pavilion. He also provided thoughtful input to a number of successful park-based Boy Scout Eagle projects. Tom and Maryfran could always be counted upon to deliver virtually around-the-clock care for Sunrise Park, where they lived, and always did so with respect for the environment and park visitors.

Because of the relatively undeveloped character of Stony Brooke Park, Tom’s efforts there were mostly concerned with environmental preservation.

The Suffield Conservation Commission’s officers and commissioners would like to extend their sincere appreciation for all Tom’s efforts and wish him and his family well in the future.

Next Article
Suffield Community Aid
For more information about any of the programs call SCA at 860-668-1986.