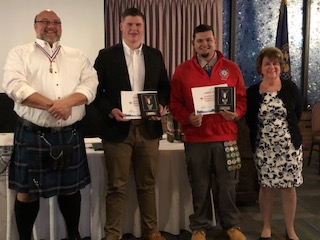 On Saturday, March 14, 2020 at the 15th Annual Matianuck District Scouter Recognition Dinner of the Connecticut Rivers Council Boy Scouts of America, Evan Mankouski was awarded the 2019 Emil Huyghebaert Eagle Scout of the Year Award. The Matianuck District is comprised of 12 towns including Suffield and 53 scouting units. Evan obtained his Eagle Scout from Troop 260 of Suffield in February 2019. His Eagle Scout project was constructing a GaGa Dodgeball Pit at Sunrise Park in West Suffield.  The court provides an alternative activity for scouters, visitors and campers to enjoy a contained dodgeball court. GaGa Dodgeball Pits have increased in popularity at camps, playgrounds, schools and parks. Evan is a 2019 Suffield High School graduate who is currently attending Bentley University.

Next Article
Food for Thought
“Barbecue may not be the road to world peace, but it’s a…