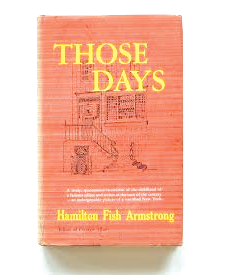 The author of this book was the creator and first editor of the distinguished magazine Foreign Affairs. He was born in 1893. One of his first memories was of a large New York parade moving north from Washington Square when he was three years old.

Hamilton (called Ham in the family) was the youngest of seven children. He grew up in a lovely large house on Tenth Street. His father was an artist as well as two of his sisters. The story of his childhood offers a view of a place very different from New York today -a smaller city and in some ways more civilized. Hamilton loved roller skates and was able to explore almost the whole city on his skates. He also went to school on his skates, and sometimes a friendly policeman would stop the traffic for him.

In the spring, the family would spend some time at their house at Danskammer up the Hudson River, and later in the summer on a lake in Quebec.

My Aunt Mary, who worked at Foreign Affairs, sent me this book when it was published. It has been hidden in one of our bookcases for a long time, and I just ran across it again. Reading it after all these years was just as delightful as the first time and made me wish I could really visit that long ago New York City.

The year is 1914; the place is Hell’s Kitchen in New York City. Louise Faulk has somehow managed to become a police officer, although none of the male policemen is happy about that. She has been assigned to a musty basement to watch over prostitutes who have been arrested.

Surprisingly though, she is sent out to a murder scene. Rosie is a prostitute and she has been found in her apartment in a bathtub, with slashed arms and her infant son, who was with her in the tub and has drowned. He is a twin and his twin Johnny is alive and nearby in his crib.

Because of her occupation – and the convenience to them – the police are quick to call it a suicide. Louise thinks otherwise. She has talked to a mother in another apartment who said that Rosie loved her children and took good care of them. The police don’t care what she thinks so she sets out to investigate on her own. This sounds like a pretty grim story, and I guess it is, but it is a well-written story with an interesting plot, good characters and, even humorous at times.

Next Article
Suffield’s Own Second Chance Shop
You don’t really appreciate what you have until it’s gone.