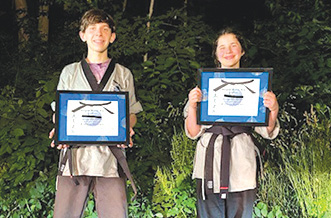 On June 19, Suffield students Quinn Bathgate and Sarah Michaels earned their Black Belts from Integrity Martial Arts (IMA). The two, along with four others, began special black belt preparation training in November last year. The typical training cycle is about four months and their black belt test was scheduled for March 20. Then COVID happened.

IMA quickly switched to classes from home over Zoom or Facebook Live. Quinn and Sarah continued their virtual extended training without knowing for how long their test would be delayed. Finally, at the end of May the group began training outside in earnest. Then a test date! The test complied with social distance guidelines, was outside, and unlike any test IMA had held before.

After many grueling hours on a hot June day in a dusty and grassy field, on into dusk lit by car headlights, Quinn and Sarah ended their test and participated in a nighttime outdoors ceremony. Congratulations to Quinn and Sarah!

Next Article
Setting a Good Example
This colorful sign takes more than a moment to read and consider,…