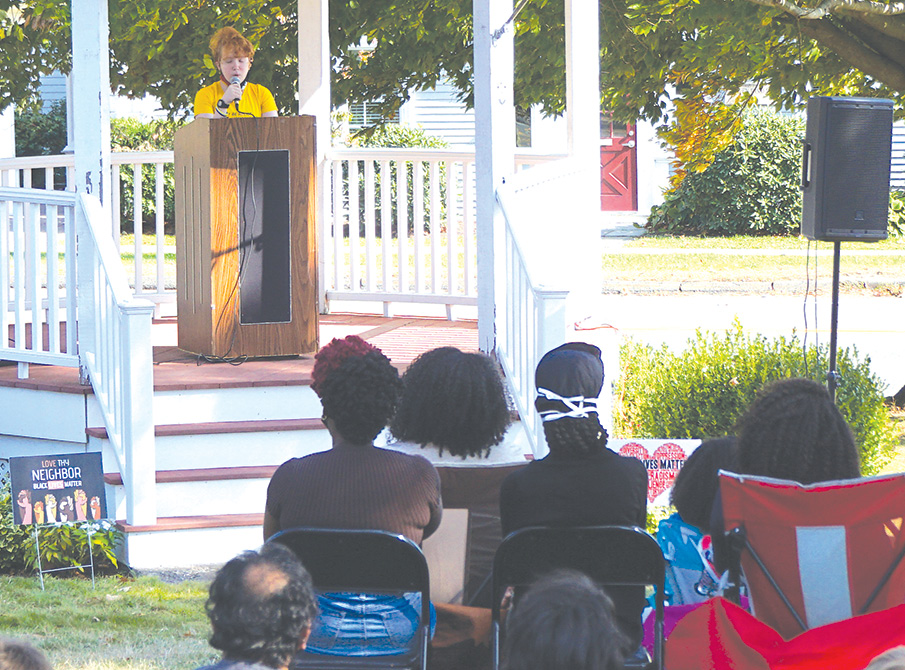 Ash Richardson, a freshman at Suffield High School, speaks openly, and comfortably, about their status as non-gender specific. They were one of several young speakers at the well-attended October 10 rally of Suffield ABAR (Anti-Bias, Anti-Racist), which focused on eliminating the damaging bias experienced by the LGBTQ cohort.

On October 10, ABAR (Anti-Bias, Anti-Racist) Suffield hosted, “Lift Every Voice: A Celebration of Diversity for Children and Families.” Nearly one hundred fifty people gathered to hear speakers and performers address identity, diversity, racism, and bias. The three-hour program included music, dance and drum performances, poetry readings, and talks on a variety of topics.

Jenna Sun, an Asian-American 2020 SHS graduate, spoke powerfully of encounters with racism in Suffield, and how anti-Asian racism intensified with the onset of Covid-19. Citing specific incidents beginning when she was in preschool, Jenna spoke of working toward forgiveness. She bravely discussed anti-Black racism in the Asian-American community, fetishism of Asian culture and people, and the myth of the “model minority.” She presented her case for solidarity and her hope for the future.

“I hope that…I get to see the end of this pandemic. I hope…my mom, who has been crying from not getting to see my bed-ridden grandma, get(s) a flight to see her again. I hope my fellow POC unite and understand that pitting us against each other won’t get us anywhere. I hope my white neighbors will be more outspoken in the face of injustice.”

Reagan Russell, a Suffield Academy senior from the Bahamas recited an original poem entitled “Sleepwalkers.” Reagan “was inspired by a quote from…James Baldwin, (who said) ‘the American dream is at the expense of the American Negro.’ The poem illustrates how the American dream has failed to serve people that look like (her).”

Reagan tells the story of a sleepwalker who – unaware that she’s asleep – drifts blissfully through life, impaired by her ignorance.

Only once she wakes up from her dream,

Will she finally be free.

And only then will she see

That the America she lives in

Doesn’t look the same to me.

It has deprived me of the privilege of being a sleepwalker

Deprived me of the dream.

Deprived me of freedom,

Yet compared to her,

Ash Richardson-White, an SHS Freshman, spoke of their experience as an LGBTQ+ youth, the fluidity of identity, and the power of radical self-love.

“We can’t change what other people think of us, but we can work on changing how we, ourselves, think. You deserve the best things out of this Earth. Everyone does. We are magical, powerful, attractive beings capable of extraordinary things. Work on finding yourself. Rediscover those hidden parts of your identity. And once you do, rejoice in the power of radical self-love.”

And Christina Vega, an Afro-Latina SHS freshman, detailed encounters with racism beginning when she was a child. She expressed a range of emotions from anger and frustration, to determination, hope and love.

“I know…it’s easy to walk away…I don’t get to walk away. I have never had that choice because I can’t just wipe off my blackness.

“This journey to being anti-racist is like the ocean. Sometimes there will be smooth sailing, but other times, there will be stormy seas. We all just have to hang on for the ride. All storms pass eventually.

“I spend so much…time worrying about the world’s view of me, all because of my skin, something I have no control of. I have seen…too much hate towards Black people, and people of color. We need to make changes…to end racism and end bias and end fear.

“…As angry as that bias makes me, as much as that makes me…want to yell at the whole world, I can’t.

“The people of ABAR are here to make a stand, to change Suffield for the better, and I am so proud to have a role in helping to make our community better.”

To learn more about ABAR Suffield, please visit the Facebook group of the same name or email ABARSuffield@gmail.com.