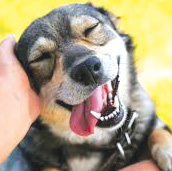 A dog is an amazing buddy.

Dogs are amazing buddies, can do so many things and are bred all over our world. A dog is a domesticated carnivore of the canidae family and a wolf-like species. Scientists believe that dogs started becoming pets around the 1700s. A lot of people think of dogs as just pets, but there is much more to them. They actually help us in many different ways.

Dogs have all sorts of jobs such as police, shepherd and sled dogs. One of the most common police dogs is the Bloodhound. Bloodhounds don’t have many reasons to be good police dogs, but their ability to track makes up for it. They are amazing trackers because of the loose wrinkled skin around their face that helps them capture scent particles and keep them around longer. Their super long drooping ears capture a lot of odors which are sent into the nostril area as well. Sheep herders, also known as shepherds or sheep dogs, are bred to look after and bring sheep to graze. Some good shepherds are Australian Shepherds and Belgian Malinois. They are very helpful to humans and sheep, and make very good pets. Also Shepherds have some really deep barks that are good for making the sheep run.

Sled pulling dogs make most people think of the Siberian Husky, but they don’t realize another great sled dog is the Alaskan Malamute, which people mistake for the Husky. Having all their fur allows them to tolerate temperatures down to -75 degrees! What also makes them amazing at their job is that they are extremely strong.

In conclusion, dogs can offer many things to people. They are very beneficial because they do a lot of the same jobs as humans. Dogs also offer companionship, love and happiness.