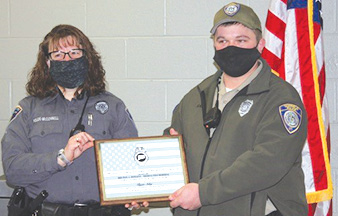 Editor’s note: The Observer misidentified the Suffield Animal Control Officer in the opening sentence of this article reporting his being honored as ACO of the Year. He is Ryan Selig, as noted in the photo caption.

Paul A. Deneault was a Connecticut ACO/Supervisor who was well respected and loved. When he passed away, the state Municipal Animal Control Officers Association (CMACOA) wanted to honor him by having an ACO annual award given in his name. In 2009, ACO Theresa Foss passed away due to injuries incurred in the line of duty. In 2011, her name was added to the award.

This is a prestigious award in recognition of an outstanding ACO’s commitment and dedication to the animal care and control profession. Anyone (public or employees) can submit a nomination, and the award winner is selected by past ACO recipients of the award.

Suffield First Selectman Melissa M. Mack spoke, praising Selig for all the work he has done in the community. She stated that he was instrumental in assisting with the development of a sustainable and cost-effective agreement with the River Valley Animal Center, replacing the aged and inadequate dog pound facility. He has gone the extra mile to secure reimbursements of some of Suffield’s expenses in responding to animal abuse matters.

ACO Elease McConnell (Manchester), President of the CMACOA, spoke to Selig’s many accomplishments and presented him with the 2020 award plaque.

Also in attendance from the CMACOA were ACO Cheryl Gagnon/Vice President (Cromwell), ACO Tina Binheimer/Secretary (Tolland) and ACO Gail Petras/Treasurer-Webmaster (Middletown), as well as a small group (due to COVID-19) of family, friends and police officers.

Selig has advocated on behalf of the Town and partnered with the State of Connecticut to address animal abuse issues and has participated in highly publicized animal abuse issues/cases and a canine attack resulting in a fatality. He is a certified Emergency Medical Responder. After completing numerous training hours, he is also P.O.S.T (Police Officer Standards and Training) certified in Animal Training, Firearms Instructor and Conservation Law. At the request of the Department of Agriculture, he has developed a firearms training program for his fellow ACOs, which is presently incorporated into the present ACO training program.

They assist with supplying pet food for those in the community who may need a little extra help (temporarily) to be able to keep their pets. Many ACOs in the state (on their own, not required) have established pet food pantries to help families in the community through some rough times. ACOs also facilitate low cost rabies vaccine events to help ensure that pets stay healthy and the community is protected.

Selig provides services to both Suffield and East Granby. His commitment, dedication and his knowledge drive the profession to better serve the community, which supports his selection for the 2020 award.