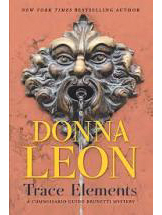 This is a mystery featuring police Commissario Guido Brunetti who works in the city of Venice in Italy. She has written many of these books featuring the Commissario and while they always have a good story line, even better, are all the characters and conversations between them. Guido has a wife who is a professor at the the university and two children. There is also his boss, who he does not care for, and the boss’s secretary. Elettra, who is his ally and an expert at putting one over on his boss, has an ability to hack into anything to get information that Guido needs.

In this particular story Guido is called to a hospital by a dying woman who needs to see him. Unfortunately, she is just able to gasp out a few words before she dies and the rest of the novel is Guido trying to puzzle out what the apparent crime is that she wanted to talk to him about. Her husband, who worked at the company that ran the Venice water systems operation, had died in a motorcycle accident that may not have been an accident. He is working with a colleague and they come to so many dead ends, but of course they finally solve the mystery which is the point after all of a mystery novel.

In addition to the interaction with the other characters, there is a lot about Venice and much about eating and drinking wine. I would think that if they made a movie about one of Leon’s novels, Guido would be portrayed as a big man although, they do eat a lot of salads. All in all her books about the Commissario are very entertaining.         C.M.

This is a story about the members of a German family during the two World Wars. It was written in German but translated into English in 2007. The main character is Helene, the youngest girl in the family. There are older sisters, and Martha is the one most helpful and close to Helene. They live in Bautzen, a town in eastern Germany. Their mother, Selma, is Jewish and as the story moves along she seems to be failing mentally. When their father died she would not go to his funeral.

When the second World War breaks out, the sisters move to Berlin to work at one of the hospitals. They will live with their aunt Fanny. Helene falls in love with a soldier named Carl. They are a devoted couple and hope to get married, but Carl dies in an accident. This is devastating for Helene and changes her in several ways.

Much later another man, Wilhelm, will become part of her life. He wants to marry her but Helene has no such desire. But after a while they do marry, and have a little son, Peter, who has an important role in the story. (In fact Peter appears in the first pages of the book.)However, this marriage does not last.

Reading this book can make a person very thoughtful about how things can go wrong in a country. I do not mean that America is the way Germany was. Certainly not! But there are many ways we can help our country move ahead in the right direction.                            P.M.