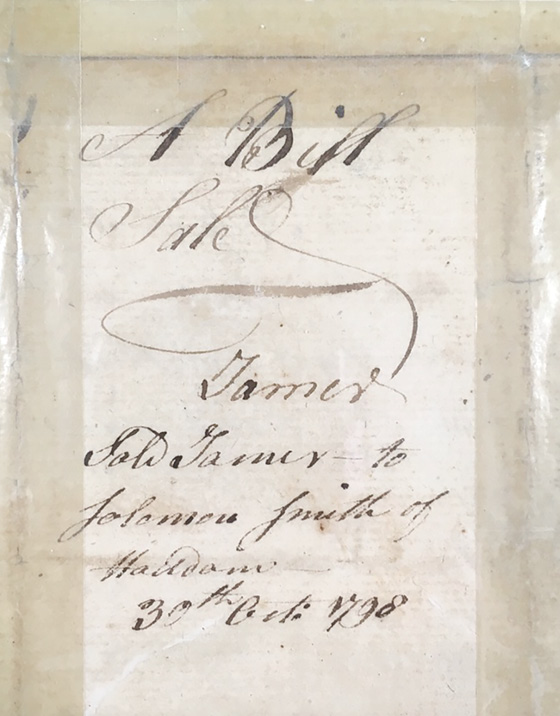 Notations on the back of Tamar’s 1777 bill of sale to Luther Loomis. The document is one of many treasured items preserved in our library’s historical room. It will be discussed in the Suffield Historical Society’s virtual meeting on April 13.

The Suffield Historical Society’s April 13 meeting will be devoted to updating our community on intriguing developments regarding the research and installation of two Witness Stones Memorials. The meeting is open to the public, and newcomers are most welcomed. Please attend the 7 p.m. program by accessing the Zoom link below.

The first project began early last fall when the Society hosted an online class for adults interested in learning about Tamer (aka Tamar). She was enslaved by Comfort Smith and Luther Loomis from the 1770s until 1798, when Solomon Smith, son of Venture Smith, purchased her freedom for marriage. The class was originally planned for three separate nights, and then many original discoveries extended this online class throughout the winter months and now into the spring.

Jan Peake, SHS Trustee and King House Docent, personally reached out to the Middlesex and Haddam Historical Societies for help with our research goals regarding Tamer Smith’s later narrative after she left Solomon Smith in 1810. Along with being a docent at the Phelps-Hathaway House, Jan was also the Director of Education and Research at the Webb-Deane-Stevens Museum where she developed years of expertise researching lives of enslaved individuals in the Connecticut River Valley. Her proficiency produced an important document from the town clerk’s office in Haddam. Log onto Zoom and learn how this 1829 document about Tamer’s passing in Middletown helped the class better understand Tamer’s life and appreciate even more ways she exercised agency and resistance as an African American women in the Early Republic era.

The other part of the evening program will involve Suffield Academy students from Bill Sullivan’s Senior Seminar. They will present their discoveries about Titus Kent (1733-1813), an enslaved Revolutionary War veteran whose name is inscribed on our Veterans Memorial. These Suffield Academy students hope to help members of the fifth-grade class at McAlister Intermediate School appreciate Titus Kent’s contributions to Suffield’s colonial past when the fifth graders learn about Connecticut’s colonial past. This partnership will be part of another Witness Stone Memorial for Titus Kent later this spring.

Dennis Culliton, Founder and Executive Director of the Witness Stones Project, will also be a part of the evening program and will share how best to bear witness to the history and honor the humanity as well as the contributions of the enslaved individuals who helped build our Connecticut communities. The Witness Stones Project began in Guilford four years ago and has spread to other Connecticut towns such as Madison, West Hartford, Greenwich, and Norfolk, whose new installation in the month of May will be for James Mars. The program is also expanding to other states in our region. Please email Bill Sullivan for the Zoom meeting link or  with any questions regarding this program or if you would like to join the online adult education class regarding Tamer: bsullivan@suffieldacademy.org.

Next Article
New Times, New Play!
The Suffield Players present the debut of a contemporary comedy: Perseus and…