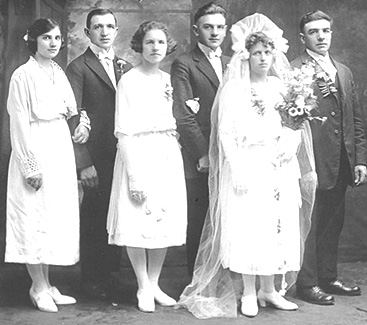 This 1922 wedding portrait for Walter Kozikowski and Anna Lucaj shows Walter’s cousin, Dominik Kozikowski, as best man. The name of the maid of honor is unknown. The bridesmaid and the usher at the left were Walter’s cousin, Sophie (Kozikowski) and her husband, Peter Szczuka.

This article is a tribute to the Kozikowski Family that started on East Street and ultimately made a notable contribution to the town. It is the first in a series that will introduce some of the Polish immigrants that started as many as five generations of Polish Americans that now call Suffield, “home.” We dedicate it to Harry Kozikowski (1932-2020), co-founder of the Polish Heritage Society. As co-chair of the Society, Harry shared much Polish history, culture, and folklore. When generous donations of Polish heritage were presented to the Society, Harry always offered to store and care for them in his home.

Harry’s father, Walery Kozikowski, was about 18 years old when he arrived in New York on April 24, 1905. He went to work as a paper mill worker in Ludlow, Mass. Anna Lucaj was about 16 years old when she arrived on May 24, 1914, and became the housekeeper for the Oscar Phillips family on East Street. She also cared for his ailing wife. Walery and Anna eventually met and were married on July 31, 1922 in Suffield.

Walter (Walery) became a farm laborer on the Phillips’ farm, while Anna continued as housekeeper. The seven Kozikowski children grew up referring to Mr. Phillips as “Gramps.” (Harry was known to have held the son, Allen Phillips, in very high regard.) In the spring of 1930, the family moved from the house they rented for $20 a month to a house they bought on Hasting’s Hill. It did not have electricity or indoor plumbing at first, but Anna insisted it have a telephone. The 1940 census indicates the home was valued at $3,500. On that farm, the couple taught all the children the farming skills necessary to keep it running productively. They raised their descendants with the strong Polish work ethic that Suffield agriculturists were glad to hire. That work ethic was passed to the next generation, especially when it was time to bring in the tobacco crop. Walter and Anna’s grandchildren were expected to be part of the harvesting crew.

The Connecticut State Motto is, Qui transtulit sustinet. Loosely and respectfully translated, the motto says that he or she who migrates nurtures his or her new national home. Walter and Anna Kozikowski had made Suffield their new home and became United States citizens in 1940 and 1943, respectively. When Walter died in 1950, the closest Roman Catholic Cemetery at the time was in Windsor Locks. The Kozikowski family wanted their father to be buried in his town and Anna wanted to give something to their town. In 1955, the family donated nearly 18 acres of their farmland to St. Joseph’s Church and made that possible. Walter and a son, Harry’s brother, Paul, who had died in 1939, were subsequently re-interred on the land they had once farmed.  Harry now lies there too.

Harry was the last of the 1st generation Polish Americans in the Kozikowski family and the last to live in Suffield. Members of the three subsequent generations are scattered throughout the country. Fortunately, the family gift ensures the Kozikowski name will be remembered forever.