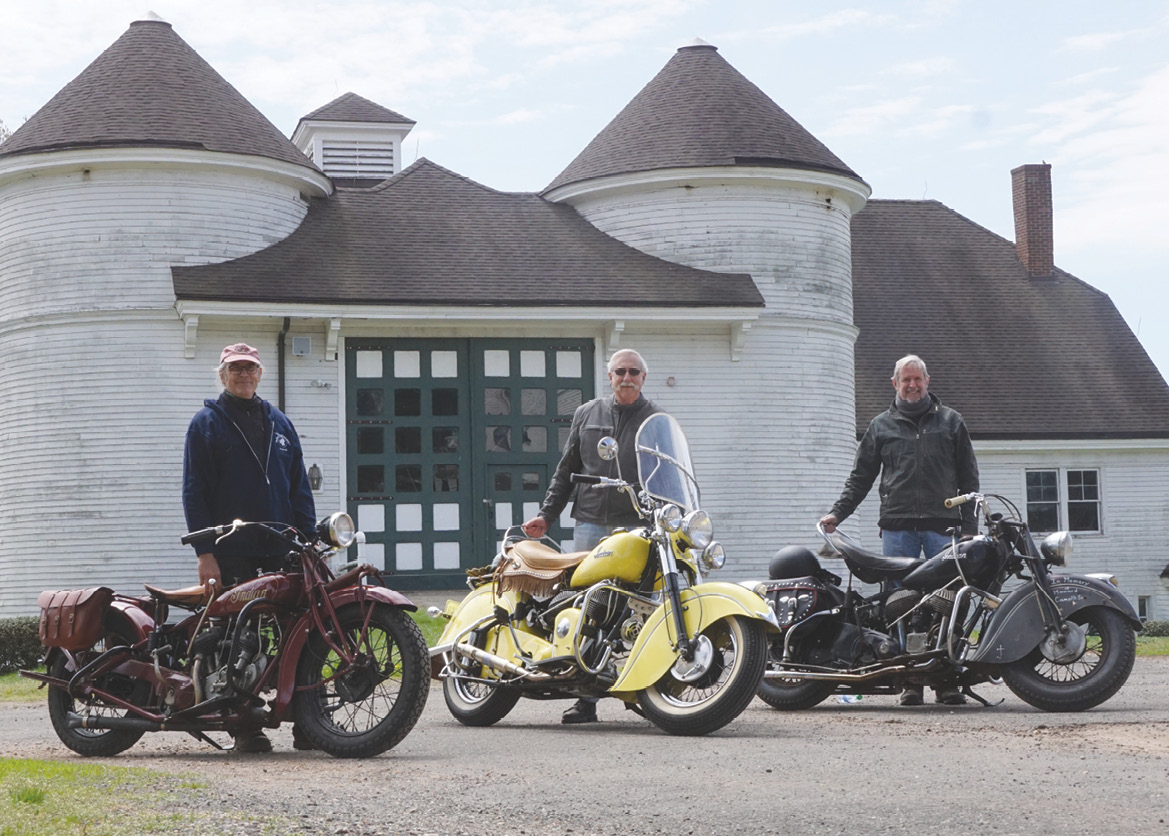 Three Indian Motocycle enthusiasts pose with the classic bikes they rode to Hilltop Farm on April 27 in memory of the 120th anniversary of the first motorized bike Oscar Hedstrom designed and made for George Hendee. Together, Hendstrom and Hendee created the company that became Indian Motocycle, which prospered for many years in Springfield. That success allowed Hendee to create his mansion and gentleman’s farm on a hilltop in Suffield. From the left: Rockwell Rookey of East Windsor and his red 1928 Indian Scout representing George Hendee; George Gilbert III of Portland and his yellow 1951 Indian Chief representing Oscar Hedstrom; Kurt Tomolonius of Middletown on a black 1948 (actually another of George Gilbert’s bikes) also representing Oscar Hedstrom.

This spring marks the 120th anniversary of the first trial run of an Indian motorcycle prototype in Springfield, Mass.

The key players were Portland, Connecticut’s Carl Oscar Hedstrom, the mechanical genius who built the first bike completely by himself in four months, and George Hendee, an astute businessman and former national/world high wheel bicycle champion, who was producing “safety bikes” in Springfield. Hendee was a Watertown, Conn., native.

High wheel bikes, also known as penny-farthings, typically had 54” front wheels, 12” back wheels and no chain. Pedals were attached directly to the front wheel, so there was no coasting. They could be difficult to mount and dismount and dangerous to ride. They were embraced more by strong athletes than the common man. “Safety bikes” were similar to what we ride today, with two wheels of the same diameter connected by a chain and sprockets. They were easy and fun to ride and quickly became popular among men and women. By the end of 1896, 300 companies in the U.S. were making them.

After his high wheel bicycle stardom, Hendee started manufacturing safety bicycles in Springfield under the “Silver King” and “Silver Queen” names and sponsoring bicycle races throughout the east on wooden tracks called velodromes. He owned an interest in several, including the Springfield Coliseum.

Those races featured a motorized “pacer” bike designed to break the air for the bicyclists, allowing them to go faster and ride longer distances. The pacers of that era were notoriously unreliable. Some races required up to six pacers on hand as extras, since they broke down so often. They were widely ridiculed by spectators.

Oscar Hedstrom, who had been an amateur safety bicycle racer and builder, had turned to producing tandem motorized pacers known for their durability and reliability.

Hendee and Hedstrom, who traveled in the same sporting circles, met and agreed that producing motorized bikes for the masses could be a profitable venture. They signed a partnership agreement. Hedstrom would produce a motorized bike for Hendee.

To keep that era in perspective, the Wright brothers wouldn’t be making their maiden flight until 1903, two years later, which, coincidentally, was the same year Harley-Davidson motorcycle was founded. Henry Ford’s Model T wouldn’t be introduced until 1908. Certainly, there were other motorized bikes and automobiles being manufactured, but nothing considered truly reliable or mass marketable.

According to a Sept. 18, 2018, article in The Vintagent, “The launch of Hedstrom’s motor bicycle took place on Saturday, June 1, [1901] at the Cross Street hill in Springfield, where a reporter at the scene described a crowd of 400-500 people watching as Hedstrom rode his machine up the 19-percent grade of the loose-gravel street with power to spare.”

That was the start of Indian Motocycle (marketed without the “r”), which by 1913 became the world’s largest motorcycle maker when it produced 32,000 machines – nearly 42% of the domestic market. That would later prove to be its highest production year.

The bikes were manufactured in what would become a 400,000 square foot five-floor manufacturing plant at State Street and Wilbraham Road in Springfield, employing 3,200 workers. The plant had a manufacturing capacity of over 60,000 motorcycles annually.

Hedstrom would leave the company in 1913; Hendee in 1916. Indian ceased operations in 1953. The rights to the Indian name were later purchased by a variety of manufacturers and investors who didn’t fare well. That was until 2011, when Polaris Industries bought the rights and is once again producing Indian motorcycles.

George Gilbert III and Kurt Tomolonius represent Oscar Hedstrom. George is the former president of the Portland Historical Society, which houses some treasured Hedstrom memorabilia. Hedstrom owned a home and other property in Portland and is buried there.

Rockwell Rookey represents George Hendee, who built a 17-room manor (razed in 1961) and adjacent 18,700 square foot barn with outbuildings on nearly 500 acres in Suffield, after his retirement. About eight acres of the barn and outbuildings are owned by the nonprofit Friends of the Farm at Hilltop. Since 2002, the group has been painstakingly renovating the properties and plans to open the barn to the public this summer. For more information, see hilltopfarmsuffield.org.