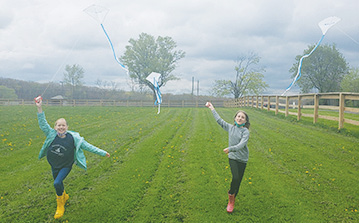 Running through a field at Hilltop Farm during a fun-filled Girl Scouts Earth Day event in April, Payten Benito (left) and Annalize Boucher show off their kite-flying skills. They are 5th grade Juniors of Troop 11963.

The 11 troops who attended ranged in age from Kindergarten Daisies through 6th grade Cadettes. Troops were able to spread out in the field to fly either their own kites or the kites provided, which had “Suffield” printed on them, with bright blue and white tails billowing in the breeze. Although the wind was not particularly cooperative, the girls were able to get their kites in the air with some success by running as fast as they could!

Once their legs were tired, the girls headed out with their troop to go on a letterboxing adventure. Each Girl Scout was provided with her own small notebook and the troops were given compasses, along with printed instructions that guided them on a scavenger hunt around the Hilltop Farm property. The girls worked cooperatively and used their compass and navigational skills to locate a series of “letterboxes”, which in this case were small jars containing a stamp and stamp pad. At each stop along the way, the girls stamped their notebook to show that they had successfully located the letterbox, then went on their way, following the clues and directions to the next letterbox. The activity took them to eight different locations around the farm, all the way from the main barn, up to the composting toilet, then down the long, winding trail to the bridge and back again. A highlight along the way was observing a majestic bald eagle flying by and then sitting in the tree above its impressive nest! Troops were also able to help “leave a place better than they found it,” an important value of scouting, by donning gloves and picking up trash they encountered along the trail as they hiked.

The Suffield Girl Scouts were grateful to once again have the opportunity to utilize this gem in our town. After a long 13 months of limited activities, it was refreshing to enjoy the company of one another safely outside!

Next Article
A Flight of Swallows
Rough-winged swallows line up over the Windsor Locks Canal Trail.