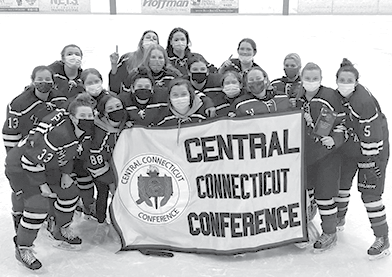 The season came to a fantastic end for the Wildcats, who took home the CCC Championship title after defeating the Simsbury Trojans on Friday, March 26, ending in a 3 -2 overtime vistory.

Avon was the only other team to have beaten the Trojans this season, and had played Suffield three times prior, with scores of 1-5, 0-2, and 6-0.

The Wildcats and Trojans played three games during the regular season, with Suffield losing their opener 2-3, another matchup at 3-0, and a third loss at 2-3 after Simsbury scored twice in the span of 40 seconds late into the last game.

The Wildcats’ March 23 semi-final win against Avon was a tight match. Junior Kylie Downs from Granby capitalized on a rebound in the first period to score the only goal of the game.

The first goal of the CCC championships was scored by Nicole Loftus just over 15 seconds into play, but the Wildcats retaliated mid-way through with Suffield freshman Janine Eitel scoring in a scrum in front of the Trojans’ net.

The Wildcats came in strong with the second period with sophomore Natalie Ewald picking up a pass through the neutral zone and into the net, bringing them to 2-1. The tides turned yet again with Nicole Loftus connecting Molly Walsh’s pass across the front of the net, tying the game 2-2 as they went into the third.

Simsbury entered the third period on an almost-full powerplay after a penalty from junior Iva Filipovic, followed by a brief four-on-four after a hit on Downs in the Wildcats’ defensive zone. The third period remained scoreless and an eight-minute 5v5 ensued.

The team ended the regular season with a 6-6-0 record and 3-0 in the playoffs. You can follow the Suffield Wildcats on Twitter: @GWildcatsHockey