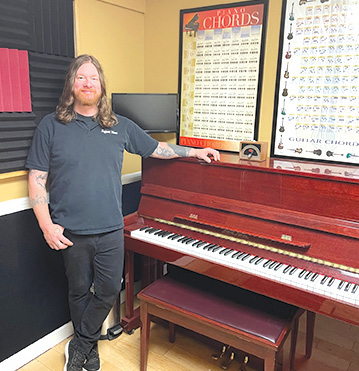 Suffield Music proprietor Josh Friend is pictured in one of his studios.

A lot can happen in ten years. When Falcetti music closed the doors of their Enfield store in the summer of 2011, one of their teachers, Josh Friend, was at a crossroads. He could either continue teaching at their Springfield store or strike out on his own. It wasn’t until he heard about Suffield on the Green, a craft fair in the small town on the other side of the river that he decided he was going to try to start up his own music store. He set up a booth, secured some students and opened the doors of his new store in Suffield Village on September 15, 2011. Ten years, one name change and 60,000 lessons later, Suffield Music has become the “go to” spot in town for music lessons and evolved into an important part of the fabric of our community.

In the beginning it was just Josh and one other teacher. They had two rooms for lessons, and they called it the “Rock Shop.” After receiving multiple calls from people looking for precious stones and gems, Josh decided Suffield Music was a more appropriate name for his business. Since then they have expanded to six rooms, a practice space for bands, and a roster of over 10 teachers. They provide both in-person and virtual lessons for all instruments. They also offer instrument rentals, repairs and sell a wide variety of musical equipment.

Suffield Music has enabled countless people in town to pursue their musical passion, including me. Music has always been a big part of my life. Throughout my youth I always wanted to learn to play guitar so I could emulate my heroes such as Alex Lifeson and Jimmy Page, but I never found the time to dedicate to learning the instrument. Shortly after Suffield Music opened, my wife suggested I take some lessons to fulfill my lifelong dream of becoming a guitar player. I made the call, started taking lessons and shortly thereafter was playing rudimentary versions of classic songs from my youth. It was the beginning of a wonderful musical journey that continues to this day. There are many stories just like mine from current and past students at Suffield Music. Some students have become teachers, and some have gone on to become professional touring musicians. Regardless of each student’s individual goals, Josh says the favorite part of his job is getting an opportunity to see them show what they have learned at the annual recital or when they are playing on the Suffield Music stage at Suffield on the Green.

Suffield Music continued providing virtual lessons this past year as businesses were limited due to COVID restrictions. As we come out of the pandemic, they are excited to showcase their recently remodeled space for in-person lessons. They are currently waiving their registration fee for all new students until the end of 2021, so there is no better time to start pursuing your own musical goals. Also, to commemorate their 10th anniversary, Suffield Music is hosting a summer concert series on the Green. The series will run every other Wednesday from 6:30-8:00 p.m., starting June 9 and ending September 1. The performers will be a mix of local bands with the final performance showcasing current students and teachers. The concerts will be a great way to get out with your friends and family, enjoy the summer weather and do something many of us have greatly missed throughout the pandemic, listen to live music. It will also be a great opportunity to celebrate a business that has brought the joy of music to many people in this community over the last decade.