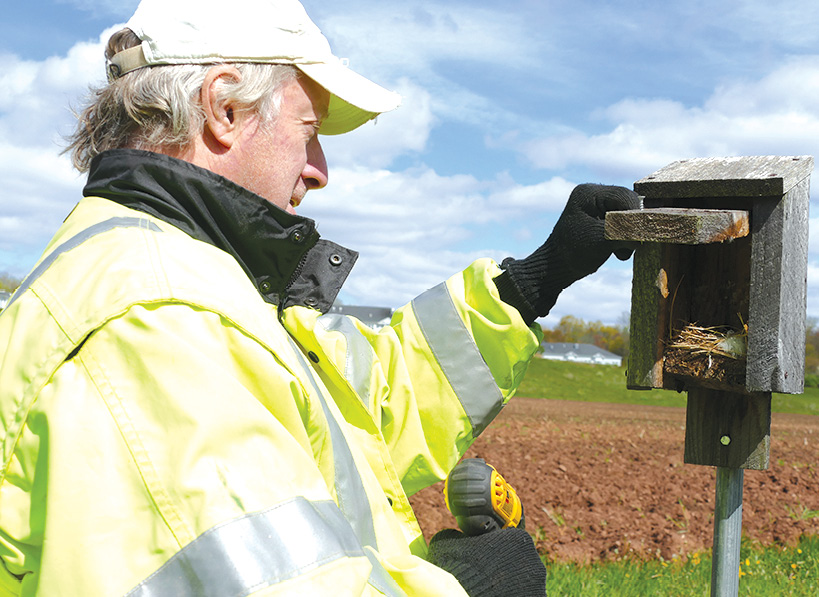 Songbirds abound at the Windsor Locks Canal State Park due to the 16 nest boxes that surround the fields on both sides of Canal Road. The boxes are in areas of scattered trees and short ground cover where the birds can scan the ground for a meal of insects and spiders. The houses are fitted for cavity nesting birds such as bluebirds, tree swallows, house wrens, black capped chickadees and tufted titmice

Jonathan Sorrow, President of the Windsor Locks Canal Friends group, maintains the houses and keeps track of occupants. He visits each box about every ten days and cleans them out in the fall. Last year he reported fledging 30 house wrens, seven bluebirds, and 25 tree swallows. The most distasteful part of the job, said Sorrow, is clearing out the house sparrow nests.

The Wildlife Division of the CT Department of Energy and Environmental Protection has instructed him to destroy house sparrow nests, eggs and kill chicks because it is an invasive species. They outcompete with native cavity-nesting birds. Invasive species will take over occupied nest sites.

Because of the competition, nesting boxes play a vital role in maintaining populations. Invasive species, removal of old trees, habitat loss and climate change have all reduced the number of natural hollows available for breeding. Natural cavities in hollow limbs, trunks, or deserted woodpecker “apartments,” decay within two or three years. Manmade houses are more durable and are frequently equipped with protection from predators.

Setting out songbird houses and encouraging them to take up residence brings benefits. Tree swallows eat all kinds of flying insects: mosquitoes, flies, mayflies, wasps, beetles, and moths to name a few. They chase prey in the air, with acrobatic twists and turns, and sometimes converge in large numbers in an insect swarm.

While swallows feast above, bluebirds and house wrens feed on the ground preying on caterpillars, beetles, crickets and spiders, among others. On a larger scale birds contribute to pest control, pollination, seed dispersal, ecotourism and environmental monitoring.

For approximately 13 years the nesting boxes have benefitted the Windsor Locks Canal Park Trail. Who built them? Who installed them is uncertain. Sorrow remembers building houses with his dad, past president and founder of the Friends of the Windsor Locks Canal, Steve Sorrow. He recalls, the Scouts might also have been involved. Because the songbird boxes are there the sky over the park is always busy. The vegetation is alive with melodic warbles and chatter. Photographers and bird watchers frequent the trail. Others benefit from the feelings of relaxation and peace the harmonious singing of birds can create.