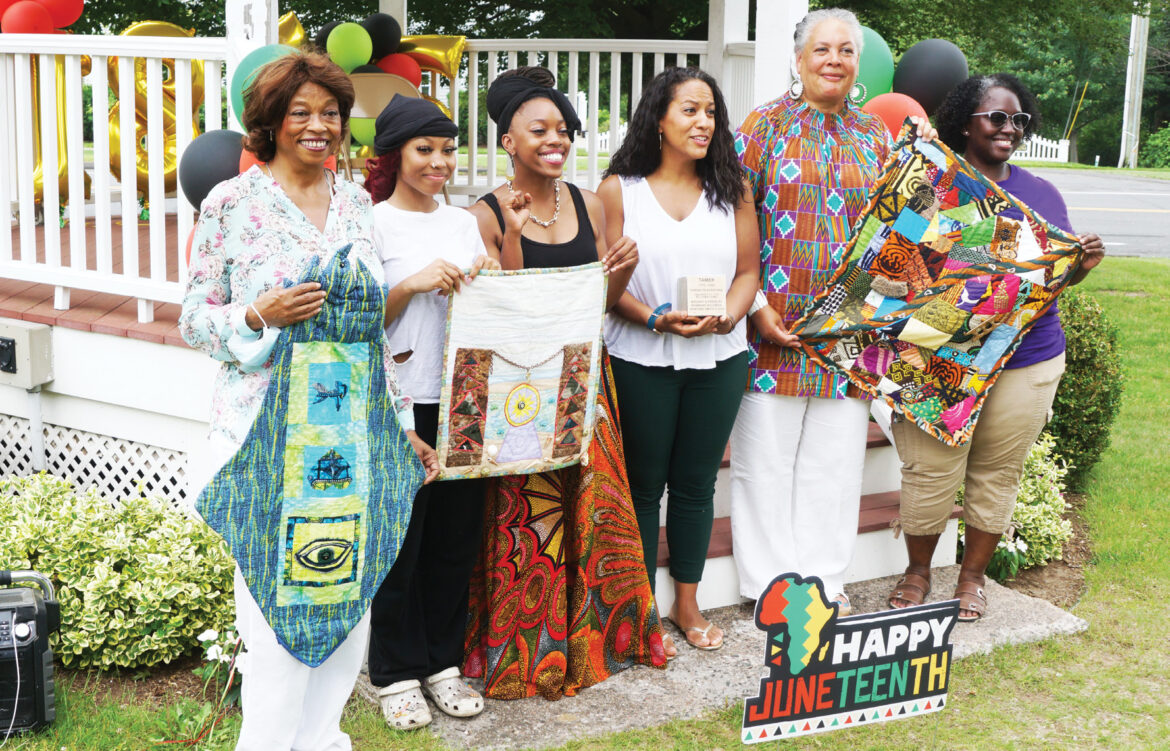 Most of the Juneteenth presenters on June 19 in Suffield gathered for a photo. From the left: Pat Pheanious, Lashea Williams, Sonia HIll, Elizabeth Warren with the Tamer Witness Stone, Susi Ryan and Cassandre Victor-Vega. Pheanious is a descendent of Venture Smith, along with Ryan who created the colorful textile art being displayed.

Juneteenth. A life changing day ear-marked in the fiber of our country yet many Americans hadn’t known about it until recent years. Growing up we learn about the Founding Fathers, slavery, wars, presidents, economic trials and tribulations and terrorism. We honor our fallen soldiers, veterans and those currently serving. We tip our hats to our fire fighters, EMTs, and police officers. Yet we rarely, if ever, take time away from our traditional back yard BBQs and fireworks to honor, recognize and celebrate the people who were torn from their villages and homes and forced to work a strange new land. A land where the food was different, the language was foreign and the weather life- altering. Imagine, being ripped from the comfort of your home and family only to be thrust into a new land, stripped of your identity and humanity. This was only the beginning of slavery in America, I’ll save you the gruesome details.

Imagine, for 200 years, you and your descendants are kidnapped, exploited and forced to work under unimaginable conditions. After more than two hundred years, your descendants are finally set free, no longer captive. Wouldn’t that be something to celebrate? Imagine the cookouts, block parties and celebrations we’d have – they’d be the most spectacular displays of freedom, love and victory. This sounds like an amazing event to honor and celebrate, so why don’t we? We celebrate our independence from England so why not celebrate the end of slavery?

As a Black woman in Suffield, I was hesitant to get the planning off the ground for Suffield’s first Juneteenth event. I see the comments in the forum, I see the middle fingers given to me as I walk down the street with my children, I hear insults yelled at me by passing cars and the whispers in the hardware store when other patrons don’t see me in the next aisle. Suffield thinks they are a warm and welcoming community, but that’s a hard statement to swallow for folks who look like me. Planning an event that acknowledges, honors and celebrates Black life, was a bit daunting. However, with the support of ABAR Suffield and Melissa Mack, Suffield hosted a beautiful event that uplifted Tamar, the enslaved woman of Luther Loomis in Suffield. In doing so, we also paid homage to Venture Smith and his son Solomon, both of whom were enslaved men and have ties to our community. For 90 minutes, we shared the life and legacy of these enslaved Suffield people. Then, in true BBQ fashion, we ended with impromptu dancing, the best way we know how to bring folks together!

Sojourner Truth said, “Because of them I can now live the dream. I am the seed of the free, and I know it.” Because of my Black enslaved ancestors, I am now free and I intend to honor and uplift their life and preserve their memory; I will celebrate their Freedom Day. Because of my white Revolutionary War ancestors who fought for their freedom from England, I will celebrate our nation’s Independence Day. They both gave me freedom.