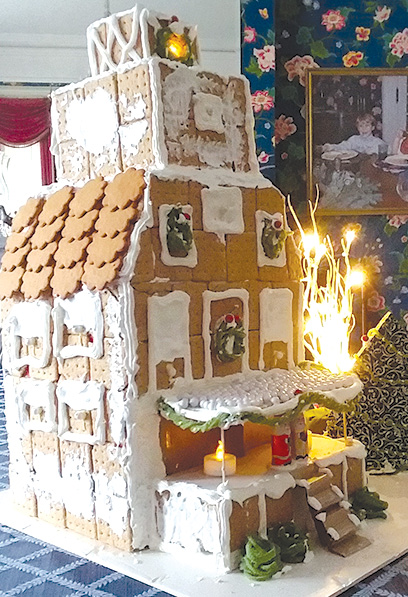 An example of a graham cracker construction.

This event provides family fun in recognition of Suffield’s Sylvester Graham and his contribution of the graham cracker.

Suffield families and groups of any kind are invited to build a diorama built out of graham crackers for a competition that will take place on Sunday, October 10, in the Commons at Suffield High School. This activity will be part of the culminating event of Suffield’s 350 +1 celebration. Doors will open for set-up on one of the Commons tables at 2 p.m. Please include a sign with the name of your creation and the group that built it.

Other products inspired by Suffield’s 350th anniversary will be on display and for sale starting at 3 p.m. as the documentary, Our Town: The Story of Suffield, CT (1670-2020) is shown in the auditorium at 3:30, 4:15 and 5:00 p.m. on a large screen in high definition. This will be an opportunity to have your 350th celebratory book, Suffield Stories from Another Half-Century – 1970-2020, and posters, maps, guides, and programs signed.

Guidelines for making a diorama out of graham crackers are to build on a sturdy base and to use cardboard boxes to design the structure. Graham crackers can be attached to the structure using royal icing. Decorations can be made using colored icing and candies. The theme can be anniversary-related or seasonal. Most important – have fun! Prizes for originality, relevance to Suffield’s anniversary, and execution will be awarded the afternoon of October 10.