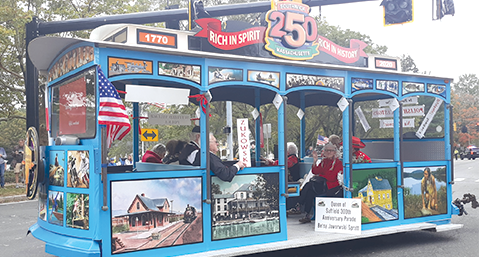 Photo provided by the author Members of the Polish Heritage Society in Suffield rode in and walked behind a trolley float borrowed from its builders in Southwick. The float had been prepared for the major Southwick parade for that town’s 250th anniversary, a week later on October 16. Good friends, indeed!

Celebrate Southwick 250 deserves all the credit for the gorgeous trolley that enabled some excited first- and second-generation Polish Americans to participate in the Suffield 350 Parade on Oct. 9. The trolley was the entry from our Massachusetts neighbor. The Polish Heritage Society merely benefitted from the ride.

Our members wanted to honor the immigrants who settled here in the early part of the 20th century. Who better to do that than some of their children and grandchildren? With due consideration of their age, the proverbial thumb went up, looking for a ride. Along came Celebrate Southwick 250! Although the trolley, a replica on wheels, was not designed for anyone with disabilities, it accommodated nine proud Polish passengers (average age of 84) for the Suffield parade. One rider was 90 years old, two others about to cross that age threshold. The youngest passenger, Elizabeth Jaworski Spratt, was crowned Miss Suffield during the town’s 300th Anniversary celebration.

Six walkers carrying signs with the names of their ancestors followed the trolley. Some wore traditional Polish garb. The recorded music of the Rich Bobinski Orchestra (familiar to anyone who has attended a Polka Night at the Sacred Heart Parish hall) accompanied the entourage and entertained spectators. One of the polkas, entitled “Suffield Village,” was written and arranged by Suffield resident and PHS member, James Turek, for the 350th Anniversary of the town of Suffield.

Of historical interest, the trolley was a particularly appropriate vehicle for the Suffield Polish-Americans of the 21st century because it represented the electric transport that played a role in the growth of the ethnic community of the town in the early 20th century. In 1904, the Hartford & Springfield Street Railway connected our farming community with the industrial cities to our north and south. City-dwelling relatives of the farmers were able to visit their kin and return home with fresh vegetables and dairy products. Before the establishment of St. Joseph Church, immigrants in the rural areas attended native-speaking Catholic Churches in the cities with a little more ease. In essence, the high-speed transportation of that era brought men and women together to start their families.

The Celebrate Southwick 250 trolley was unable to stay for the block party following the parade. Else, spectators could have enjoyed the colorful painted panels that depicted the scenery, history, and landmarks of our neighbors across the Congamond Lakes. Southwick was established in 1870 when it was set off from Westfield. The trolley participated in its town parade on Oct. 16. The Suffield Polish Heritage Society was grateful for the ride.

Next Article
A Pop of Autumn Color
Invasive Bittersweet