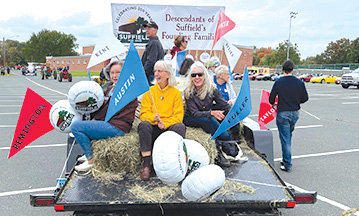 350th Anniversary Committee float recognizing some of the descendants of Suffield’s founding families.

Lots of planning, time and effort went into Suffield’s wonderful 350th celebration on the weekend of October 9-11. To start, our 350th parade, well organized by Melissa Finnegan and Pete Hill (and their many, many volunteers), was made up of 69 participant groups, mostly from town. Many of the groups had organized and produced creative floats and the atmosphere was charged with anticipation. We had all been waiting to be a part of something “normal”, a chance to be a part of a community event that seemed a long time coming, and what a weekend it was!

The weekend weather was perfect – cool and cloudy. On Saturday, the parade, starting at 10 a.m. at Mapleton Avenue and North Street, continued to Mountain Road ending at the Suffield Middle School parking lot at about 11:30. The streets were lined with excited people waving and calling out to the parade groups several of whom handed out party favors to the waiting crowd. At the end of the parade in the SMS parking lot and circle, many of the attendees had a chance to get a better look at the Corvettes, tractors and floats as well as grab something to eat at one of the three food trucks available at the Block Party. Lawn games and bounce houses were also a draw for many of the kids.

Part of the 350th celebration included soccer and field hockey games on the various playing fields in town, which unfortunately didn’t end up including the boys’ teams, as there was a bussing issue for them.

On that Saturday night a gorgeous fireworks display was launched from Bruce Park fields, one that could be seen from many locations in town,

Sunday afternoon the 350th Committee sponsored a Premier Party highlighting three film showings of Our Town: Suffield CT and the book release of Suffield Stories From Another Half-Century 1970-2020, both projects undertaken by the 350th Anniversary Committee.

The final event was Monday’s drawing of the winners for the 350th raffle of a generator, a lawn mower and a snowblower from D&F Power Equipment on the Town Hall steps.

All in all, a very satisfying weekend which was enjoyed by so many.