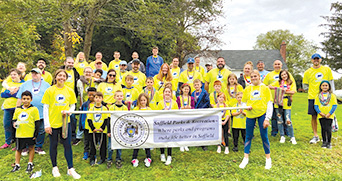 Wow! October was quite a month in the Town of Suffield! The highlight of the month for me, Parks and Recreation, and I am certain for most of the town, it was 350th Anniversary celebration during Columbus Day weekend. I have one word describing this weekend, “Amazing”. The BIG Parade, as it was tagged, brought together different community groups, and so many people that I wondered how many people were left in town to watch the parade. There was such a sense of community pride with all the groups and spectators alike.

The Parks and Recreation contingent was led by our banner carriers, the new and beautifully decorated Parks and Recreation van, and then followed by a large group made up of not just staff, and commissioners, but volunteer coaches, instructors, parents, and children for a wide variety of our programs. I felt it was important to give an opportunity for people to march and support their community, and what better way that to march in the Parks and Recreation family? Our music playlist of party hits had our contingent, dressed in bright yellow t-shirts, and crowd dancing and singing along the route, and we made many kids’ days by handing out beaded necklaces down Main Street and Mountain Road. It was definitely a two-mile party! As a bonus, we were near the beginning of the parade, so I was able to watch most of the parade as it ended in the parking lot at the McAlister School.

After the parade, the block party was a fun area to gather and see old friends. It added to the excitement of the day. Later that evening, fireworks capped off the night. What says celebration more that fireworks in your town? The 350th Anniversary Committee and parade organizers did a wonderful job, and should be so proud of their efforts. Well done!

October was still filled with many other Parks and Recreation programs. Soccer tops the lists with almost 300 players and a host of volunteers, organizers, and referees. It is always great to see so many young players getting out there and enjoying themselves with their friends. Between after-school programs, special events with Youth Services, more sports, and other fun activities, I would have to write another article to list all we had going on during the month. If you would like to stay up to date on all happenings, please follow us on Instagram and Facebook. On both social media platforms, we can be found at: @suffieldrec.

I really enjoy writing these articles for the Observer for a few reasons. At the top of the list, these articles are a way to update those of you who may not be heavily involved with our happenings. The articles give you the opportunity to stay up to date, and generally, get a preview of upcoming programs and events for the Town. Until next month, check out all our programs at: wwwsuffieldrec.com, and get out and enjoy yourselves.

Next Article
Looking for Suffield Crocks? Order On Line
If you didn’t have a chance to purchase a Suffield or West…