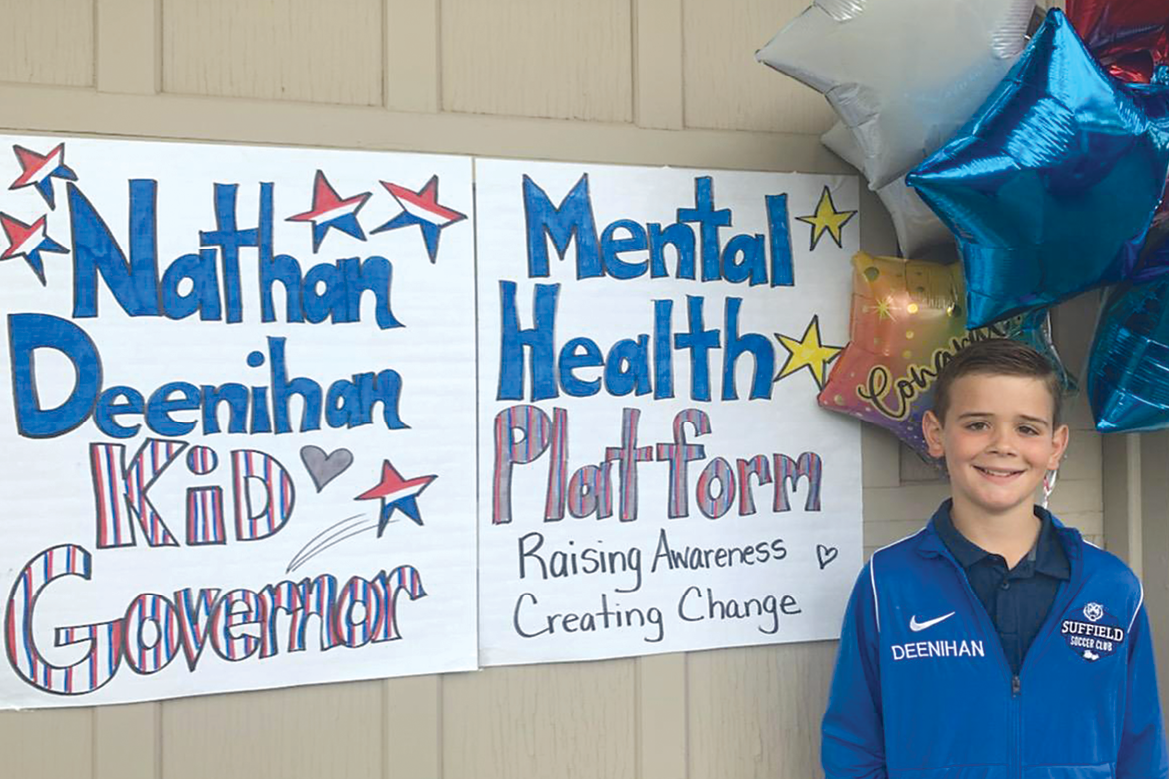 The Kid Governor program is a national award-winning civics program for 5th grade students created by the Connecticut Democracy Center. It provides students with a ground-breaking approach to learn about civics. This program immerses students in learning about state government; elections and voting through civic participation in a real-life election. This program allows students to select a CT Kid Governor.

There are two levels of participation in this process. McAlister started its participation as a Vote Only School while those involved learned about the process and expectations. The last two years our fifth-grade students have opted to nominate a candidate in this process. One Kid Governor was selected to represent McAlister School and the Suffield Public Schools as well. Students selected a platform on a topic that is near and dear to their hearts and presented their platforms to their peers and teachers.

Each homeroom selected a finalist to compete in the competition and then one finalist was selected to represent the grade level as a whole. The seven finalists and their platforms are:

Following an October campaign, fifth-grader Nathan Deenihan was selected as the McAlister Intermediate School candidate for the position of Connecticut Kid Governor. In his public appearance before the Board of Education, where all the McAlister finalists were recognized, and in an interview with The Suffield Observer, he seemed like a very good choice.

This year McAlister was among 39 Connecticut schools that nominated candidates for the state election, from which a final seven candidates were culled by another committee of educational professionals for the state vote during the entire week of election day, November 2. That vote included many Vote Only schools as well. The Connecticut winner was from Kenneday Intermediate School in Windsor. The Connecticut Democracy Center expects him to participate in CDC programs and events during 2022.

Suffield winner Nathan Deenihan was not among the final seven chosen from McAlister, but he intends nevertheless to continue promoting mental health, his campaign issue. In his stump speech and an Observer interview, he showed a remarkable alertness to current events and commented on news articles about growing problems in pediatric mental health care. Referring to how well his family has handled his father’s death two years ago, he wrote, “I want other kids to be aware of their mental health so they can be happier and healthier and understand it’s okay to have mental health issues and to ask for help.”

Hi everyone, my name is Nathan and I’m excited about running for kid governor.

Did you know that mental health is just as important as physical health? I have learned that mental health needs more attention in schools and in general and that’s why I am choosing to focus on mental health as my platform. I recently read an article about how CCMC, Connecticut Children’s Medical Center, does not have enough rooms for children with mental health issues. That made me scared for all of the kids that are hurting or thinking about hurting themselves and are in need of medical attention.

Mental health isn’t only an issue in Connecticut. I recently read an article about how pediatric groups in Massachusetts have declared a state of emergency for children’s mental health. These issues were present before the pandemic started and now are increasing. This is a crisis!

If you or someone you know has any of these symptoms please tell an adult so you can get immediate help.

If I am elected your Kid Governor, I plan to support the fight for Mental Health with my three-point plan. Number 1, I want to have a mental health day in school where everyone learns about mental health and does fun activities with their class once a month. I would provide materials to schools and each month would focus on a different subtopic such as depression, anxiety and social skills.

Number 2, I would have kids fill out a survey sheet about their Mental Health one time every 2 months. That would tell teachers and parents about how kids are feeling in school and in general which would allow them to identify areas of student need.

Number 3, I would meet and work with Boards of Education across the state so that every year kids would be allowed excused mental health days where they can have a day off from school so they can be home with their family to just check in on their mental health without it counting as a missed day.

When kids have mental health issues it is harder for them to be as happy and healthy as they normally would be and that’s what I want to help with.

I have also faced many challenges in my life including when my dad was diagnosed with brain cancer when I was three, and he passed away when I was eight. My family and I are very aware of our mental health which is one of the main reasons why we are handling a difficult loss so well. I also know that mental health issues can make kids and adults want to hurt themselves or take drugs or alcohol which are never good options for handling your emotions. I want other kids to be aware of their mental health so they can be happier and healthier and understand it’s ok to have mental health issues and to ask for help.

I hope to be your 2021 Connecticut Kid Governor and join you in the fight to help kids with their mental health!