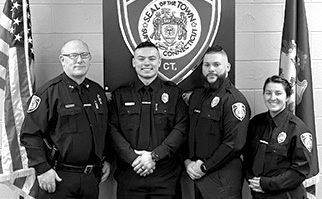 On the morning of Thursday, November 4, the Suffield Police Department held a pinning ceremony to celebrate the hiring of our three newest officers. Although the officers have been working here in town for several weeks, they deserved a ceremony to commemorate their arrival here in Suffield.

Officer Christopher Reagan was hired in the fall of 2020 and completed his training at the Waterbury Police Academy in June of 2021. Both Officer Erin Fox and Officer Randy Roman came to Suffield by way of a lateral transfer from the Hartford Police Department, after serving there for several years. Officer Fox was hired in April of 2021 and Officer Roman in June of 2021.

The ceremony was held in the Zak Community Room of the Suffield Police Department and was attended by town dignitaries, including members of the Police Commission. Chief Brown opened the ceremony by welcoming each of the officers to the town of Suffield and spoke of the duties now required of them. He additionally took time to thank the family members of the new officers for their patience during the hiring process and expressed thanks for sharing their loved ones with the town by way of their service.

Town Clerk Kathy Dunai provided the oath of office to each officer, who was subsequently pinned by a family member. The honor and tradition of such ceremonies are meant to share with the members of the department, community and Town leadership the initiation of what we hope will be long and great careers in public service to the Town of Suffield. Should you see Officer Reagan, Officer Fox or Officer Roman around town, please say hello and welcome them to the community.