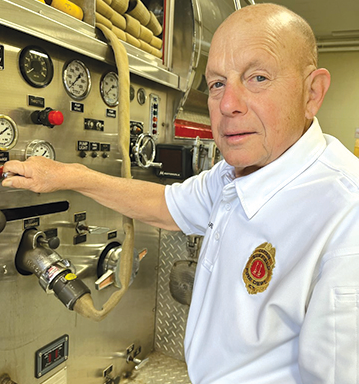 Veteran trainer and firefighter Ron Carlson is pictured at the pump controls of a Suffield fire engine.

For a humble man, Ron Carlson recently garnered a lot of press and acclamation. He shook his head as he recounted how his simple request to ascertain his exact anniversary date with the Suffield Fire Department generated a whirlwind. His anniversary was a big one: fifty years on September 13, 2021. That in itself was a cause for celebration, which the Suffield Firefighters Association observed during its September monthly meeting and posted on its Facebook account. But then the whirlwind began. Melissa Mack honored him at a Board of Selectmen meeting, a Journal Inquirer article ensued which was picked up by Dailydispatch.com, Fire Rescue1.com and yahoo.com. Ron was humbled by all the attention, but truthfully, he deserves every bit of accolade. Melissa Mack estimated that He dedicated 10,000 hours to the Town of Suffield in his 50 years. It was probably more.

Shortly after joining the Suffield Fire Department, Fire Chief Ray Potter asked Ron’s help in communicating fire prevention and safety measures to Suffield students. This was exactly Ron’s area of expertise. Ron had intended to become a physical education teacher. He had graduated from Springfield College with a teaching degree, but jobs in the area were non-existent, so he and his college roommate framed houses for several years. Searching for employment, he combined his interest in helping people and firefighting, so he began seeking a job as a career firefighter. First, he worked at the Bradley International Airport Fire Department. He then was hired by the Hamilton Standard Fire/Security Department, from which he retired as Assistant Emergency Services Chief in 2008. He continues to be an adjunct instructor with the Connecticut State Fire Academy, a position he has held since 1995.

Ron was voted Suffield Fire Department Firefighter of the Year in 1976. He was certified as a Deputy Fire Marshal for Suffield in 1979. In 1998, Ron was recognized by the State of CT Commission on Fire Prevention and Control as the CT Public Fire and Life Safety Educator of the Year. In 2002, Ron was recognized by the CT Association of Public School Superintendents with a Distinguished Service Award for Outstanding Service to Connecticut Public Schools.

He loves spreading the gospel of fire safety and prevention to children. Working on the programs with his Suffield Fire Department colleagues was fun. They were constantly evaluating the programs to ensure they were interesting and attention-holding. In the late 1970s, Dick Van Dyke was airing unique public service announcements on fire safety. Could the Suffield Fire Department do the same? Programs such as “Stop, Drop and Roll,” “Crawl Low in Smoke,” and “Cool a Burn with Cold Water” went well, since they were action-oriented classes. However, it was difficult to hold the children’s attention when explaining the concept of E.D.I.T.H. (Exit Drills In The Home). One day while brainstorming with firefighter Bill Zaczynski and his wife Susan, the character EDITH, a mascot of sorts, was born.

From that point on, Ron has dressed as EDITH, a warm and funny woman who delivers memorable home fire escape plan lessons. The children love her! The EDITH program is aimed at third graders who receive a visit from EDITH and a firefighter (the most recent, retired Lt. Carol Thibedeau) who review all the steps needed to create a home fire escape plan. The next day each student is taken through a mock bedroom fire (using theatrical smoke) in a Fire Safety Smoke Escape Trailer to practice escaping. Since 1977, Ron has delivered fire and life safety lessons to every Suffield public school student.

For many years Ron transported the CT Fire Academy Smoke Escape Trailer to schools and public events in every corner of Connecticut to conduct fire escape lessons. Many classes he teaches at the CT Fire Academy relate to industrial fire protection, safety and rescue. While working at Hamilton Standard, Ron created a confined space entry and rescue training facility that was used by many organizations to conduct training. After 9/11 he, with firefighters Frank White, Lew Cannon, Bill Phelps, and Joe Youdis, volunteered for numerous twelve-hour shifts at St. Paul’s Chapel, the rehab facility for workers at Ground Zero.

Amazingly, he has time for other things. Ron and his wife, Karen, as members of the Friends of the Windsor Locks Canal State Park and Trail, devote a lot of time maintaining the park. He is an avid hiker. In 2019 he traveled with Karen to China, just before COVID hit. Their photo, which appeared in the Observer’s “Where in the World” feature, begs a question. Where in the world would we be without people like Ron?