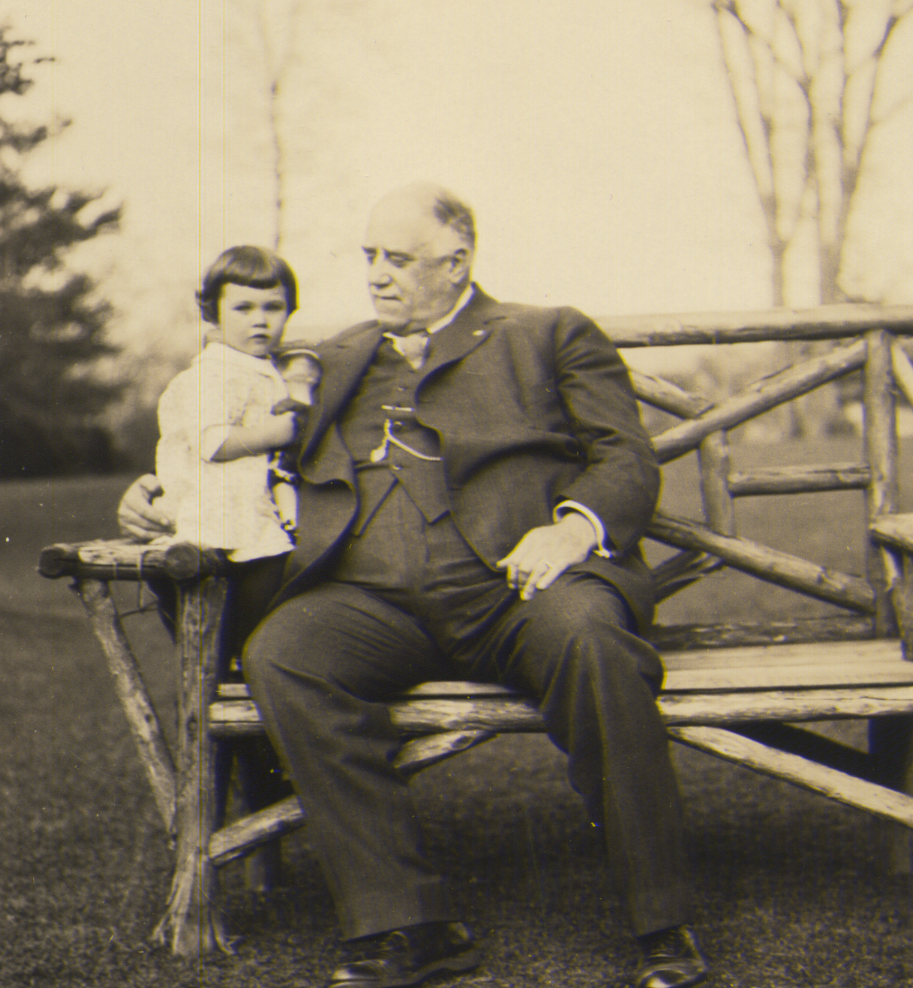 Photos were taken 80-90 years ago but the photographers are unknown. Photos were in the album of June Hale Cook. ﻿

June Hale with her Uncle George Hendee at the Hilltop Manor in 1927. The Manor was razed in 1961 after purchase by the Redemptorist Fathers.

George Hendee, co-founder of Indian Motorcycle, built Hilltop Farm in Suffield and a 17-room Manor next door shortly before retiring at 49 in 1916. He had no children but his niece and nephew, June and Fred Hale, lived one mile away in Agawam and he treated them like his children.

June was devoted to her uncle and his wife, her Aunt Edith. Through the years, June compiled an extensive archive of photos, newspaper articles and other documents on the two.

Below are excerpts from her 62 page Personal Journal and a speech she gave.

FOFAH, the non-profit association that owns Hilltop, is indebted to Donald Cook, June’s son, who donated her extensive collection after she passed away at 95 in 2020.

“I played the piano often [late 1930’s] for Auntie and Uncle George. They always seemed to enjoy it. Uncle George was fond of all the old songs like Stephen Foster and also many hymns. Auntie saw to it that I had the latest sheet music…Some of the songs Auntie and Uncle George always asked me to play were ‘When You and I were Young, Maggie’, ‘Jeanie with the Light-Brown Hair’…”

“We always had a great time at Hilltop [Manor] when Uncle George would request the ‘Laughing Song’ record be played…[which] was nothing but a man laughing.The point was to see how long each of us could keep from laughing. Watching Uncle George was hilarious! He was a large man of almost 300 lbs with this very large tummy. He would start out long before we did with just a tiny bit of movement in his large tummy area, but as the laughs became harder and harder, he would just not keep it in….We had more fun watching him than trying to keep ourselves from laughing.”

There was a full back seat, the driver seat and a jump seat beside it. That was my special place to be.”

“I recall a few times when Auntie and Uncle George took our family, with Stebbins [the chauffeur] driving, to the beach at New London Connecticut…

Uncle George loved to swim way out from shore and then float. We got a chuckle as all we could see was his ample rounded tummy.”

“They appeared to have a wonderful life together. They were always very loving and caring of each other. Uncle George was very busy building up Hilltop Manor and Hilltop Farm…

He was very proud of his Guernsey cattle. He was very active in Melha Shrine.

They had a busy social life entertaining such notables as Sir Harry Lauder, actresses Sylvia Sidney, Fay Bainter and actor Walter Connolly and President and Mrs. Calvin Coolidge. [The Hendees employed cooks and butlers at the Manor.]

It was very special when I stayed overnight when they had special parties. I could look down on the guests dancing to a small orchestra in the Grand Hall [of the Manor] from the balcony. It was a beautiful sight seeing the lovely ladies in their elegant gowns.”

In a 2010 speech, June praised her Uncle George for helping bring the Shriners Hospital for Crippled Children to Springfield in 1925 and then serving for 12 years as its first Chairman of the Board of Governors:   “He was loved by the children…and he loved the kids…He would try to be at the hospital to see the children before and after surgery…He would take me up there…for the Christmas party that they gave to the children and he just beamed when he was around children.”

Photos were taken 80-90 years ago but the photographers are unknown. Photos were in the album of June Hale Cook.

Next Article
French Week at SMS
French week is an annual week-long celebration of all things French.