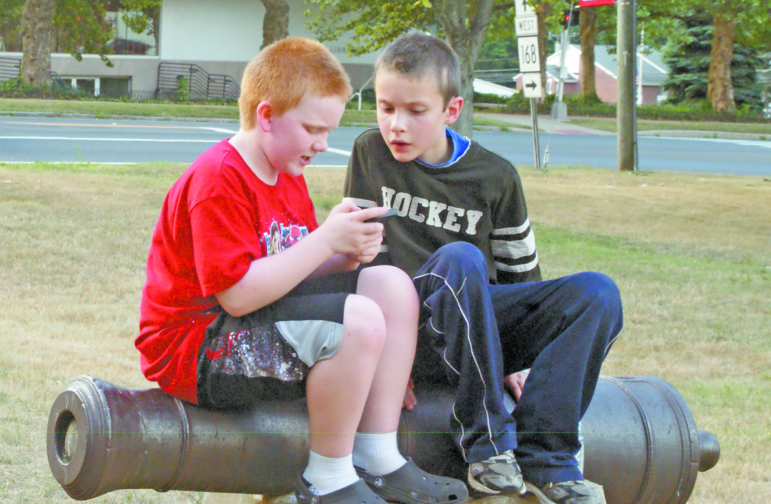 Noah Greico of Suffield and his friend Brenin Forbes of Windor Locks, both 10, share an iPhone playing Pokémon Go on the Suffield Green on July 22. The cannon they’re sitting on is a Pokémon gym, where the game’s monsters can compete.

On July 6, when the new computer game Pokémon Go was released for free download in America, the public responded enthusiastically. The game is played on smartphones, and folks almost everywhere were walking, standing, or sitting with their gaze fixed on their screens, searching for PokeStops and hoping to encounter Pokémon characters – sometimes known as “monsters” – which they could capture and train to engage in virtual battles.

The genius inherent in this game is the combination of the GPS system, which knows where you are, the Google Earth system, which knows where just about everything is, and Nintendo’s familiar world of Pokémon, with its appealingly named characters, like Squirtle, Zubat, Charmander, and of course that most popular Pikachu. Each has its own personality, powers and limitations.

Niantic, the game’s originator, exploited the multitude of locations created all over the world by players of a previous game called Ingress. These locations became PokeStops, where Pokémon Go players may obtain free items for use in the game, like eggs that can be hatched into monsters and balms to help your monster recover from a competition.

The monster/characters may pop up at a PokeStop, especially if a player has set lures there to attract them. But they can appear anywhere, in some sort of biased randomness set by the game. The player can then fling balls at a monster to capture and train him.

One hunts for PokeStops using a map on a smart-phone screen showing details of the local environment. The Pokémon character may pop up on the map, but it can also be viewed superimposed on a smart-phone camera’s live-action screen view of the real world. That’s the feature the makers call augmented reality. A rich menu of detail enhances the game, including gyms at some PokeStops where monster competitions can occur. There is plenty of opportunity for interesting play.

Suffield must have had a great many Ingress players, as it soon became known that the town abounds with PokeStops, and individual players and teams converged here from other towns. Many of the spots are clustered around the Suffield Green, but there are plenty elsewhere, including one at the jaguar guarding the bananas in Highland Park Market, at least four at Sunrise Park and several at Kent Memorial Library.

An important feature is the Pokémon store, where players can purchase lures and incubation time and other aids – for real money. So in keeping with the Suffield Police Department’s community-friendly policy, Officer Geoff Miner stocked up on water and Gatorade and bought 50 Pokémon lures, each effective for a half hour. On the afternoon of July 22, Geoff kept his lures working (virtually) at six PokéStops, attracting Pokémon to the Suffield Green. A bit of Facebook publicity was enough to draw typically 50 to 75 players at any one time, totaling well over 200 in all, in a wide range of ages.

Fitbits must be getting a good workout, as Pokémon Go gets its players off the couch and out in the open, searching and capturing Pokémon and accumulating mileage needed for incubation credit to hatch Pokémon eggs. There’s a good amount of social contact as well, along with the motivation to explore one’s environment. This looks like a game with some redeeming social benefit.

Next Article
Spearing Broadleaf
In a traditional Suffield late-summer activity, these farmhands are spearing a healthy…