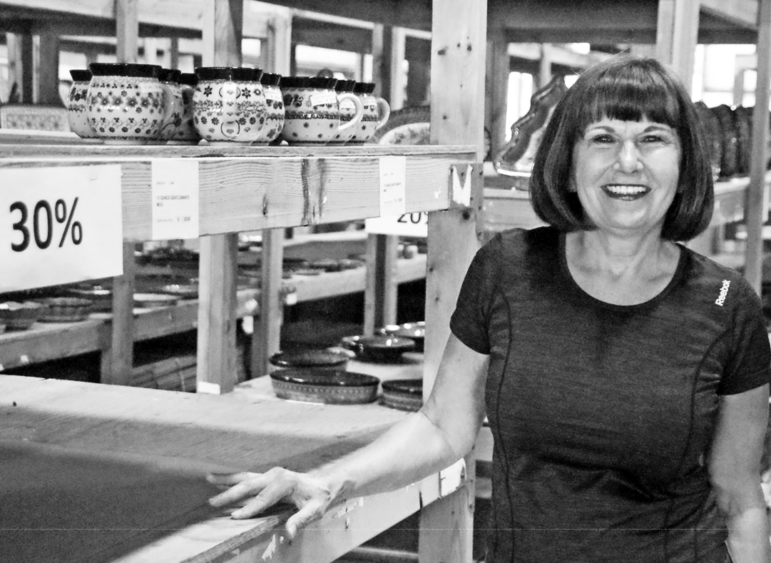 Gloria Smith is pictured among her gradually emptying shelves at Zanger Pottery. She has decided to close the business and retire at year’s end.

Well-known Suffield businesswoman Gloria Smith feels that she’s had a good run after 30 years in the Zanger Company, most of the time selling excellent Polish imports. She has now decided to close up shop and retire.

Surprisingly (to some of us, anyway), this all started when she bought Alfred Zanger’s cutlery and cutting board business in Thompsonville, located in one of the old buildings of the former Bigelow Sanford carpet mill. After a short time there and then on Turnpike Road in Windsor Locks across from the airport, she moved to a “business incubator” space on Moody Road in Enfield, still selling imported cutlery and manufacturing polyethylene cutting boards.

Gloria soon realized that that business would not likely achieve much success, and she made a big decision. She established a relationship with a top-notch factory in Boleslawiec, Poland, and began to market imported, handcrafted, Polish pottery. (She calls her source there the “Rolls Royce” among the several pottery factories in Poland.) This writer recalls delivering excess newspapers from the Boy Scout paper drives to Moody Road for use in packing pottery shipments. Other residents may remember Gloria’s notoriety when she appeared on national television promoting her Polish pottery on the QVC show. The mail order business flourished, and when the opportunity to occupy a larger facility in Suffield’s Mach One Industrial Park presented itself 12 years ago, she moved the operation there. In 2013, Connecticut Magazine described the Zanger Company in a “success story” article.

But time passed, and Gloria reports that she recently considered selling the business and slowing down. She hesitated on the possibility that a new owner might not be able to follow her successful methods or apply as much hard work, and she didn’t want to see her creation languish. So the closing is planned for December 23. Asked about the future of the potters in Boleslawiec, she assured that they have many other contracts for their top-notch product.

And for Gloria’s future, she plans to remain in her comfortable home on South Main Street, and, among other things, she intends to obtain a pilot’s license. She has already begun researching where she should take her flying lessons.