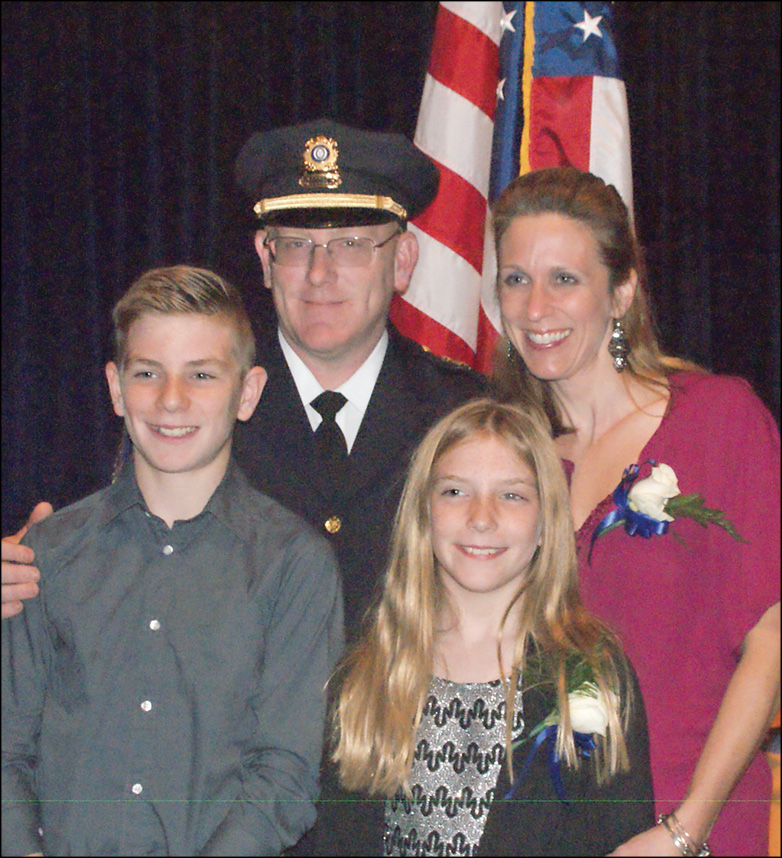 Following his well-attended swearing-in ceremony in the SHS auditorium on November 1, new Suffield Police Chief Richard Brown poses with his family. Clockwise from the Chief: his wife, Julie, daughter Katie, 10, and son Patrick, 12.

It was a happy time – the culmination of over a year of careful activity as the Suffield Police Department recovered from the events of the spring and summer of 2015. Over several painful months of turmoil then, a dispatcher had been discharged, Chief Michael Manzi had resigned after a unanimous vote of no-confidence by the police union, and Captain Craig Huntley had retired under almost the same pressure. Interim Chief Anthony Riello had been hired in July to help the department heal. The search he coordinated for a new full-time chief was suspended in December and his contract was extended. Now, with Chief Riello promoted to Superintendent of Police Operations, a new chief had been promoted from within.

On October 26, Richard Brown, a two-decades veteran of the Suffield Police Department, was unanimously approved as the new chief by the Police Commission; he was sworn in on November 1 by Town Clerk Kathy Dunai in a grand ceremony in the SHS auditorium. He had been promoted to lieutenant in December and to deputy chief in July when Chief Riello became superintendent. Riello, having done his job, is now scheduled to depart at the end of the year. The superintendent position will undoubtedly vanish.

The swearing-in ceremony was adorned with a proper color guard and was attended by visiting chiefs and other high-ranking officers from Suffield fire and ambulance departments and neighboring police departments, as well as by many friends and two former Suffield police chiefs: Murray Phelps and Mark Leahy. First Selectman Melissa Mack spoke, as did Police Commission Chairman Kevin Armata and Superintendent Riello, who asserted that the Suffield Police Department was one of the most professional agencies he had worked with in his long career: “A truly professional department!” Everyone then retired to the Commons for cake, cookies, coffee, and congratulations.

New Suffield Police Captain Christopher McKee (pictured here) had taken that position on October 31 after 24 years in the Windsor Police Department. McKee, after serving in the army before his Windsor career, was following in the footsteps of his father, who had retired as a captain in Glastonbury.

Among other duties, Capt. McKee will handle many administrative matters, and it was he who issued a press release on November 10 announcing that Suffield resident Elizabeth Sagan had been hired to fill the long-planned position of records clerk in the department. The position is part of a strategic plan to bring the agency to the standards of national accreditation. In addition, a potential new patrol officer has passed all his vetting and almost all of his tests and will likely enter the next training program at the Connecticut Police Academy on December 30.

In news of a different flavor, Chief Brown reported at the October 26 Police Commission meeting that the Suffield Police Association had filed a grievance claiming that the current patrol officers’ duty schedule violated the union contract and that it had been improper to suspend the position of detective (recently filled by Officer Justin Fuller), while assigning detective duties to individual patrol officers. Brown explained that with the department short three needed patrol officers, it was unsupportable to assign a full-time detective. He said that the detective workload was low now, and what work was needed was being done. The Commission supported the current assignment policy and planned a special meeting on November 2 to discuss the matter. After an executive session at that meeting, the Commission voted to deny the grievance. The grievance was returned to the Selectmen’s Office; possible further action was unknown at press time.

In other news, Commissioner Ken Pascoe reported to the October 26 meeting that Suffield had been judged in 2016 to be the sixth safest town in Connecticut. The evaluation was by Safewise, an organization that provides information about home security and safety equipment – like a Consumer Reports for that category. Their study, limited to towns of at least 5,000 population, was based on FBI reports of violent crime and property crime on a per-1,000 population basis. All five towns judged safer than Suffield were located in Fairfield County.

Next Article
New Town Human Resource Director
In July of this year, Karin Ziemba started a new chapter in…