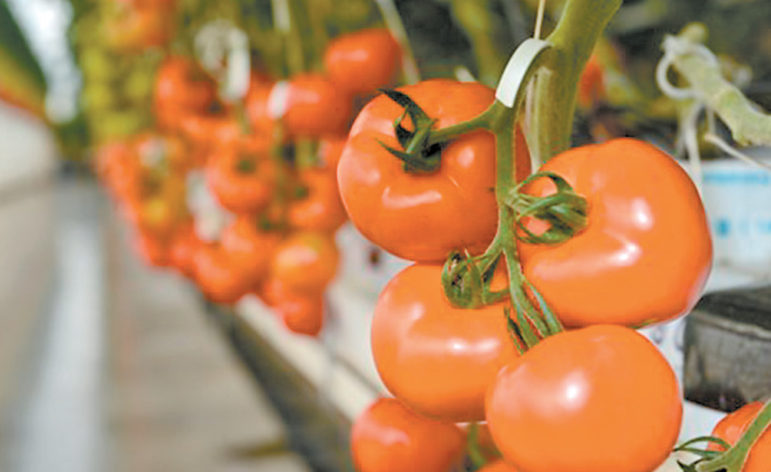 These tomatoes in one of Four Season Farm’s Wallingford greenhouses are hanging on a tall rack, ripening hydroponically.

Four Season Farm, with a seven-acre greenhouse operation in Wallingford, may break ground this spring on a large facility in Suffield. The climate-controlled greenhouses here would house an eco-friendly, sophisticated operation growing tomatoes hydroponically, with the soil undisturbed, nutrients provided in recirculated water, and CO2 consumed. The plan is to grow from September to June, providing no competition to local farmers.

Suffield authorities learned in 2015 that the modern, hi-tech farm was contemplated for the former Poole Road Farm of the Robert Baker Company, which had for many years operated 80 acres of planting beds and hoop houses there for containerized plants. The Conservation Commission granted its approval in early February, 2016, after studying the effects on wetland and the mitigation intended. Later that month the Planning and Zoning Commission held a public hearing in which neighbors questioned some aspects, including the view of the 26-foot tall greenhouse and 66-foot water tower, and the truck traffic on Poole Road – predicted to be three to five trucks per day during the production season. The PZC’s approval, with certain conditions, was unanimous.

Four Season’s plan includes running a natural gas line down Remington Street and Poole Road to heat the greenhouse. This would give local residents another fuel option.

The U. S. Army Corps of Engineers, which has a controlling interest in wetland conservation, took issue with the plan. But when they learned that Baker would preserve 55 acres of abutting woodland west of the new greenhouse, fronting on Taintor Street, the Corps was reportedly satisfied. Dale Baker said that he expected the sale of the Baker company greenhouse land to Four Season would be completed by mid-March, with groundbreaking in the spring.

On February 6, Governor Malloy announced that the State would grant $3,000,000 to Four Season Farm. The State press release said that the grant would provide financial support for the purchase of machinery and equipment for the hydroponic farm, where 40 new jobs would be created.

The first phase of Four Season’s is a ten-acre greenhouse near the turning circle at the end of Poole Road. Their long-range plan calls for expanding the greenhouse to cover 43 acres and adding other crops such as cucumbers, peppers, and micro greens. With groundbreaking in this spring, production could commence in the fall.

The governor’s press release quoted Catherine Smith, Commissioner of the Department of Economic and Community Development: “What could be better than assuring customers a fresh supply of delicious, vine-ripened, locally-grown vegetables year round?”