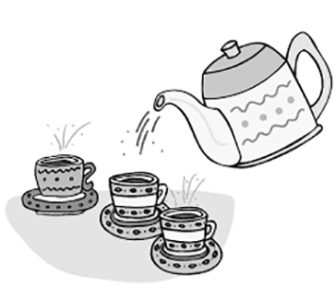 Several members and prospective members of the Sibbil Dwight Kent Chapter of the Daughters of The American Revolution met for tea at the home of Judith Hanmer on Saturday, April 29. Each participant explained an item that she brought for an “Ancestry and Heirloom” show and tell. One such interesting item was an original letter to a family member who was a landowner displaced by the Quabbin Reservoir.

The first chapter of the D.A.R. was organized in 1890, and the first meeting of the Suffield chapter was held on June 10, 1896. The original charter is in the King House Museum. It is framed in pine taken from the ancient house which was the birth place of Sibbil Dwight Kent in Warren, Mass. Her husband, Major Elihu Kent raised the first company of men on what was called ”The Lexington Alarm”, and led them to the relief of Boston. Her Suffield home was what became the Congregational parsonage. Her grave is in the old cemetery. A rock on the green in front of the Congregational Church was presented by the D. A. R. to mark the site of the first church building in Suffield.